Written by Admin on September 24, 2009. Posted in American Lung Association 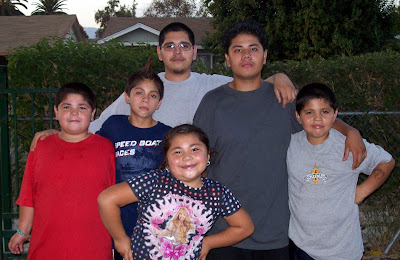 All six of these brothers and sisters have coped with asthma from an early age, which gives their mother, Rosalie Salazar, plenty of experience as she now deals with many asthmatic preschool students whom she teaches at the Westside Annex Preschool in San Bernardino. Out of concern for the many children she knows with asthma, Salazar is the Westside Annex Angels’ team captain in the Healthy Air Walk, taking place Saturday, Oct. 3 at Fontana Park in Fontana.

(SAN BERNARDINO, Calif.) Head Start Preschool employees know that many of their students face adversities. The program exists to give these economically disadvantaged children a head start in life.

For many of these children, one of the hardest things in their life is breathing. They have asthma, and sometimes even more severe lung disease.

“Sometimes we have to give them treatments with aerochambers and inhalers,” said Rosalie Salazar, a teacher at the Westside Annex Preschool. “They are little children, too young to understand why they have to inhale, so the aerochambers allow them to use their inhalers while breathing normally.”

It’s heart breaking to the staff of Head Start preschools to see these very young children struggle with something as simple as breathing. For that reason, staff and parents at many Head Start preschools in the Inland Empire have formed teams to walk in the American Lung Association in California’s largest fundraiser of the year, the Healthy Air Walk.

These teams will participate in the walk scheduled for Saturday, Oct. 3 at Fontana Park, 15556 Summit Ave., Fontana. To learn more about this event, go to www.healthyairwalk.org

Salazar serves as team captain for the group from Westside Annex Head Start, a team of eight staff and parents called Annex Angels. She’s a natural for this position, because not only has she been helping preschoolers with asthma for awhile, she is also a mother of six children, ages 7 through 20, who suffer from the disease.

“All of my children have asthma, but neither I nor their father has it,” she said. “I think it is because the air is so much dirtier than when I was growing up in Ontario.”

Her oldest child was diagnosed with asthma when he was a year old, she said. Since then, she’s become an expert, administering medication to her own children thousands of times, and learning about the various breathing apparatus asthmatics require, such as aerochambers and nebulizers (a non-portable device that combines air and liquid medication and mists it into an asthma patient’s lungs).

Salazar came to most of her knowledge about asthma independently. When she started working for Head Start, a state agency, she learned it works with the American Lung Association in California, which provides training to preschool workers in how they must manage their students’ asthma, and to help them educate these children’s families.

“I said I would do it,” she said. “I want to help raise money to help children with their breathing, and to educate them and their parents about asthma. Everyone should know how important this is.”