Written by Admin on September 28, 2009. Posted in The Art Institute 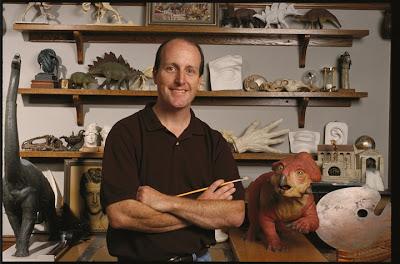 The presentation is open to the public and there is no charge.

Gurney paints with realism, that is paintings that look real, but his subjects are usually unseen. He’s best known for paintings of dinosaurs, ancient cities, futuristic landscapes and creatures from science fiction.  Besides his popular Dinotopia series, he has written books about how to draw from imagination.

“He created the million-book seller Dinotopia, which was made into a TV series. He is one of the premier illustrators in the country,” said Santosh Oomen, academic director for Media Arts & Animation at The Art Institute of California – Inland Empire.

Gurney was born in Glendale, Calif. but moved to the Bay Area as a child. After graduating from the University of California, Berkeley with a degree in archaeology, he returned to southern California for about five years, where he studied at the Art Center College of Design in Pasadena.

Before moving to the Hudson Valley in upstate New York in 1984, he painted more than 500 backgrounds for the animated 1983 film Fire and Ice. He primarily worked as an illustrator for National Geographic magazine after moving to New York, but in 2005 transitioned to a full-time career as an author and freelance illustrator.
His freelance clients include the U.S. Postal Service, for which he illustrated stamps featuring dinosaurs and sickle-cell awareness, and a post card depicting pioneer settlements in the Northwest Territory in 1788.

Gurney has exhibited his work at many museums, including the Smithsonian in Washington D.C., the Norman Rockwell Museum in Stockbridge, Mass. and a museum in Switzerland. He’s given lectures at the Smithsonian, the World Science Fiction Convention and many museums and colleges.

It’s not too late to start the new year at The Art Institute of California – Inland Empire. Courses begin October 5th and classes are offered in the day, evening and on weekends for new and reentry students.

For more information or a tour of The Art Institute of California – Inland Empire call (909) 915-2100 or go on line to artinstitutes.edu/inlandempire.