Written by Admin on October 8, 2009. Posted in Riverside County Auditor-Controller 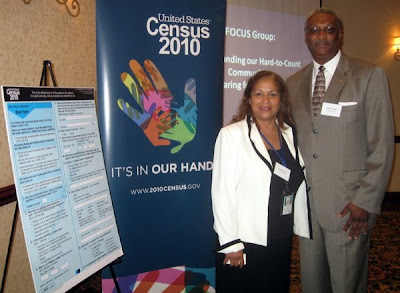 Partnership Specialist for the U.S. Census, Paula Almanza and Riverside County Auditor-Controller, Robert Byrd together recently explained the importance of the U.S Census 2010 count to a group in Riverside.

(RIVERSIDE, Calif.) Riverside County Auditor-Controller Robert E. Byrd explained the importance of the 2010 Census count as a key panelist for the Regional Convening on Census Outreach at the Riverside Marriott held recently.

“The state is missing out on a lot of dollars left on the table, not able to be accessed due to people not being counted,” said Byrd during the panel discussion. “We missed out on $1,000 a person (not counted) by not having an accurate count during the last Census,” said Byrd.

The census directs the allocation of billions of dollars to state and local governments and affects political representation.  California can lose an existing congressional seat if it does not get everyone counted.

Panelists were asked to identify the most trusted messengers in the community that could promote the importance of the Census to those with whom they are in contact.  Byrd said, “We are looking for assistance from visiting nurses, in-home heath service providers, Girl Scouts and Boy Scouts, non-profit and grassroots organizations, chambers of commerce, and members of churches.”

California has 10 of the top 50 “hard-to-count” counties in the nation.  Riverside is the 18th hardest county to count.

Eric Alborg, deputy director, Census 2010 said, “There are two characteristics that make the count difficult.  The first is units are over crowded and residents do not include the entire household. The second is the language barrier prevents people from filling out the form.”

Byrd stressed the importance of assuring people the information they provide will not harm them. “One opportunity we have is to get information into the hands of our children.  A child in a non-English speaking household can give the basic information,” said Byrd.

“The Department of Finance predicts a count of 38.8 million people in April of next year,” said Alborg.

The census started in 1791.  The U.S. Constitution requires a national census once every 10 years.

The census will hire 1.2 million people during the outreach process.  People interested in applying can call (866) 861-2010.

One of the most important functions of the Auditor-Controller’s office is to audit all of Riverside County’s expenses. The Auditor-Controller’s office also verifies, processes and creates more than 1,000 warrants to vendors each day and processes and drafts some 40,000 paychecks for county employees each month. It oversees the disbursement of more than $3 billion in property tax money each year to schools, special districts, cities and other local taxing agencies.

In 2002, Robert E. Byrd became the county’s elected Auditor-Controller with more votes cast than in the entire history of the office. He was subsequently re-elected to a second four-year term in June of 2006.

Committed to his community, he’s a member of Riverside Rotary, board member of the Next of Kin Registry, is on the International Relations Council for the City of Riverside, and is a member of La Sierra Academy’s Board of Trustees.

For details on the Riverside County Auditor-Controller’s office call (951) 955-3800. To obtain a free copy of Financial Highlights, an annual report produced by the Office of the Auditor-Controller that recaps the county’s finances in an easy-to-read format, go to www.auditorcontroller.org

Robert E. Byrd, CGFM, who is elected by the voters of Riverside County, heads the Office of the Auditor-Controller. The Auditor-Controller staff and management teams are dedicated to providing sound financial accounting, auditing and reporting in order to serve the citizens of Riverside County. More information is available on the Web at http://www.auditorcontroller.org