Written by Admin on October 13, 2009. Posted in The Salvation Army 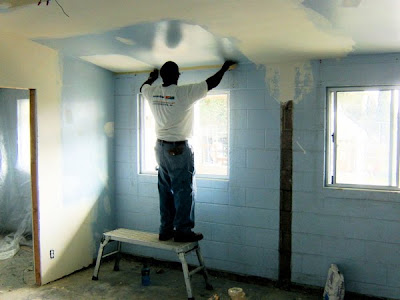 Top photo: A worker masks the trim in one of the rooms at The Salvation Army’s new Hospitality House emergency family shelter. Photo by Carl Dameron 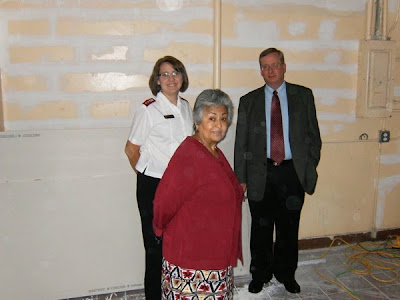 The senator visited the current location of the Corps headquarters, church and Hospitality House emergency family shelter, and the shelter/training center for Path to Prosperity. She also toured the building under remodel on Tenth Street where The Salvation Army plans to move its Hospitality House next year.

“What an ambitious project,” she said of the renovation underway at the new shelter. “I marvel at The Salvation Army’s ability to provide these programs and upgrade their Hospitality House shelter, given the economic conditions of the area, our country and the world.”

The tour began at the existing emergency family shelter. The Salvation Army has used this building as its headquarters and church for more than 50 of its 122 years in San Bernardino.

Two years ago The Salvation Army had to relocate its shelter services here, when the California Department of Transportation acquired and tore down the former location to make way for the Interstate 215 widening.

At this shelter Senator Negrete McLeod saw:
•    The Corps offices and chapel
•    A large multi-purpose room that provides overnight shelter to women and children, who are the vast majority of guests in the Hospitality House. The families sleep on mats on the floor.
•    A smaller room which also serves multiple purposes, one of which is to house men. Throughout the year, this includes husbands and single fathers. In cold weather, other single men also sleep there.
•    A small kitchen where up to 250 meals are served daily, and more on major holidays.
•    A tiny room that serves as the shelter’s current tutoring center. Tutors from San Bernardino City School District help the shelter’s school-age children here with homework.

Moving on to the Path to Prosperity shelter across Sixth Street from the rear of the main Corps building, the senator learned about this program, which shelters 27 men and helps them enroll in colleges (usually San Bernardino Valley College) or find a job. She toured the community room, a classroom and two bedrooms in this shelter.

When the tour group arrived at the new shelter on Tenth Street, the senator learned how vast changes in living conditions would soon take place for the Hospitality House guests, who usually stay up to three months but can stay up to a year in some cases. She saw how the new shelter will have:

•    21 bedrooms, allowing each individual family to have their own (or two adjoining rooms if they have a large family)

•    9 bathrooms with tub showers, which will afford the families m ore privacy and make it easier for parents to bathe young children

•    A kitchen three times as large as the one on Fifth Street, with separate areas for storage, preparation and serving/cleanup

•    A large dining room adjacent to the kitchen

•    Two rooms, together about six times the size of the current tutoring center, that will greatly expand the educational services available to the resident children. One room will be a media center where children can watch educational videos or work at study tables; the other will have a computer lab for children (and during the day, adults) and an area where tutors, parents and children can work together. The Salvation Army will rely on a $25,000 grant from Target to furnish these two rooms.

The Salvation Army also hopes, in the future, to build four to six transitional housing apartments on the new shelter property. These apartments would shelter families from three months to two years when their needs warrant additional help before living independently. The parents in these families would have resources similar to those offered to the single men in the Path to Prosperity program.

The Salvation Army needs additional funding to reach that goal, and has applied for a Housing and Urban Development (HUD) grant called Continuum of Care. As a state official, Senator Negrete McLeod has no more say in how federal HUD grants are allocated than does the general public, but she did offer to lend her support by endorsing The Salvation Army’s goal.

“I will help in any way I can,” she said. “San Bernardino has a definite need for this.”