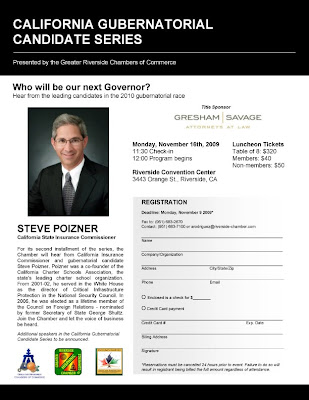 “Our local businesses want to hear what the next governor will do to tackle the issues facing our region and state,” commented Chamber President and Chief Executive Officer Cindy Roth. “That is why the Chamber is inviting all of the candidates so that they can talk directly to our employers and business leaders about their plans for solutions.”

According to his campaign website, Poizner was a co-founder of the California Charter Schools Association. From 2001-02, he served in the White House as the director of Critical Infrastructure Protection in the National Security Council. In 2006, he was elected as a lifetime member of the Council on Foreign Relations – nominated by former U.S. Secretary of State George Shultz.

Individual tickets to attend the event are $40 for members of the Riverside Chamber, and $50 for non-members. Program includes lunch. Reserve seats by October 26, 2009 to Governmental Affairs Manager, Angel Rodriguez at (951) 683-7100.

The Greater Riverside Chambers of Commerce is committed to building a stronger local economy by actively promoting and supporting our community; by fostering the growth and strength of our member organizations, and by engaging federal, state and local officials on behalf of business interests.