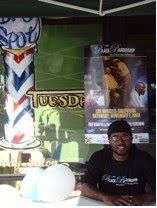 Phyllis Clark, CEO of the Healthy Heritage Movement, Inc. is the coordinator for the Southern Inland Region for the Black Barbershop Health Outreach Program. She is standing with John Jefferson, owner of Cold Cutz Barbershop in Riverside.

(RIVERSIDE, Calif.)  Black men throughout southern California learned how to maintain good health while making a trip to their local barbershop on Saturday, Nov. 7.

The men and their barbershops, including 10 in the Inland Empire, took part in the Black Barbershop Los Angeles Area Health Outreach Program, a nationwide effort to help Black men take control of their health.

Working directly in participating barbershops, a team of nurses, physicians and volunteers provide health information, diabetes and hypertension screenings and referrals to no or low-cost primary care providers.

“I am thrilled with the results of this event,” said Phyllis Clark, founder and president of the Healthy Heritage Movement, which helped the 10 Inland Empire barbershops participate in this event. My goal was to screen 100 Black men in the Inland Empire, and I believe I more than reached my goal.”

Clark made a quick survey of two of the participating barbershops, Cold Cutz in Riverside and DaSpot in San Bernardino, and found almost 50 men had taken part at those two shops alone.

Clark added she hopes more barbershops will participate in what is expected to become an annual event with .