Written by Admin on December 3, 2009. Posted in The Art Institute 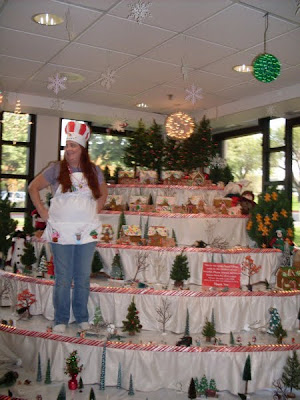 Jeanne Durbin, a.k.a. Mrs. Claus, puts a completed gingerbread house into the Gingerbread Village that will be on display all of December at Loma Linda University Children’s Hospital. 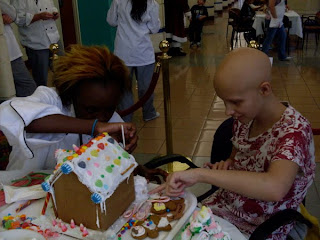 Jessica Jones, a Culinary Arts student at The Art Institute of California – Inland Empire, helps Jessica Smith, 12, who receives outpatient chemotherapy at Loma Linda University Children’s Hospital, in putting the finishing touches on a gingerbread house on Tuesday, Dec. 1. Jessica Smith’s house is one of 100 created by children at the hospital, now on display in the lobby. 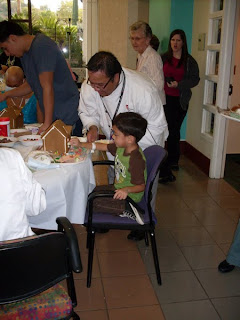 Bradley Mandapat, a Culinary Arts student at The Art Institute of California – Inland Empire helps Loma Linda University Children’s Hospital Patient Nicholas Iraheta, 6, decorate a gingerbread house at the hospital, one of 100 created by patients like him and other children who came to the hospital on Tuesday, Dec. 1. 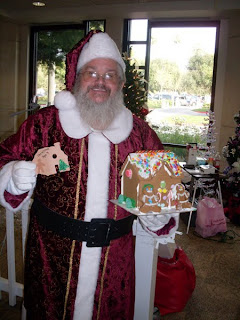 “The children are just delighted,” said Eloise Habekost, president of Big Hearts for Little Hearts, a service organization for the children’s hospital and the organizer of this annual event. “They are thrilled to have this distraction from their usual hospital routines.”

In addition, The Art Institute of California – Inland Empire donated 50 of the gingerbread houses created by the children. Big Hearts for Little Hearts, donated another 50, and its member Dottie Rice donated candy to use for decoration.

“She spends the entire year collecting this candy,” said Habekost.

Jessica Smith, 12, spent two months not long ago at Loma Linda University Children’s Hospital battling cancer. She still must return frequently for chemotherapy, and at the end of her Dec. 1 treatment, a hospital worker suggested she join other children in the hospital lobby to decorate one of the gingerbread houses.

For two hours, Jessica and her mother Teresa Aripez worked on an elaborate gingerbread house together. Then, to Aripez’s relief, six students from The Art Institute of California – Inland Empire arrived ready to help and encourage Jessica and the other sick children.

“When they got here, my energy and patience were running low,” Aripez noted. “They came in with new ideas and a lot of patience. Jessica loved it.”

Jessica Smith immediately bonded with Culinary Arts student Jessica Jones because of their shared first name. Jessica Jones recalled that the only other time she had ever decorated a gingerbread house was when she was 12, the same age as her new friend is now.

Habekost noted that many children are involved in creating these homes. They include patients, children like Jessica who come for outpatient services, and in some cases, children simply visiting the hospital.

“Some of them are in isolation because they have swine flu,” she said. “They work on the gingerbread houses in their rooms, wearing gloves to prevent contamination. Other children come here to receive kidney dialysis, and work on these during their treatment to pass the time.”

The finished houses are on public display in the hospital lobby where they’ll be shown through the middle of January.

Habekost says that people come from all over the Inland Empire just to see what the young patients have come up with.

It’s not too late to start at The Art Institute of California – Inland Empire. Courses begin January 12 and classes are offered in the day, evening and on weekends for new and reentry students.

For more information or a tour of The Art Institute of California – Inland Empire call (909) 915-2100 or go on line to artinstitutes.edu/inlandempire