Written by Admin on December 8, 2009. Posted in The Salvation Army 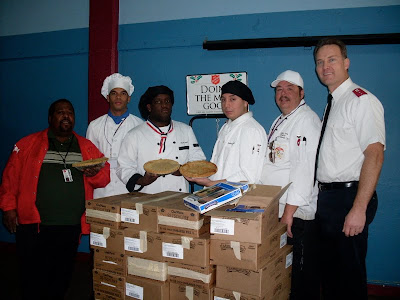 (SAN BERNARDINO, Calif.) The San Bernardino Salvation Army Corps received so much donated food on Thanksgiving Day and shortly thereafter, it had enough left over to share with other charities.

The recent donations were primarily meats and desserts, which had to be shared with others to prevent them from spoiling.

“We are thankful for this generous support,” said Capt Stephen Ball, director of the San Bernardino Corps.

On and in the days leading up to Thanksgiving, the San Bernardino Corps received so much food, it and several other local charities will be able to keep feeding hungry families for a few weeks.

The Hospitality House emergency family shelter served some of this food to the 175 or more people it serves daily, and will be able to continue doing so for a few more days. It shared the rest with the Salvation Army’s Path for Prosperity and Adult Rehabilitation Center’s mens’ programs, Veronica’s House shelter for pregnant women and Mary’s Table, which is another community organization feeding people on a daily basis.

“This holiday season we have been blessed by everyone throughout our community,” said Roosevelt Carroll, director of the Hospitality House emergency family shelter. “After the holidays, we will really need help.”

Carroll noted that 100 of the turkeys were from Costco, which also provided 60 cheesecakes and 60 pecan pies. Those desserts were added to the 100 cherry, 100 apple and 100 pumpkin pies Job Corps had already provided, as well as 80 more pumpkin pies from Arrowhead United Way.