Written by Admin on January 8, 2010. Posted in Bicentennial 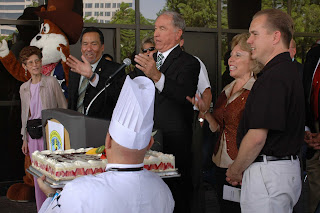 This May, Mayor Patrick Morris will lead the city in singing “Happy 200th Birthday” to San Bernardino. San Bernardino celebrated its 199th Birthday with a party. It’s celebrating the 200th with festivities lasting from February through July. Photo by Matt Sloan

(SAN BERNARDINO, Calif.)  It was May 20, 1810, tradition tells us, when a Spanish missionary, Father Francisco Dumetz, traveled from Mission San Gabriel to the San Bernardino Valley. He named this new locale San Bernardino after Saint Bernardine of Siena who was then the Catholics’ patron saint of that particular day. Thus was born San Bernardino 200 years ago.

On May 20, 2009, Mayor Patrick Morris and other dignitaries of state and local government, cheerleaders from San Bernardino High and a couple hundred other residents, set the stage for the 2010 Bicentennial Celebration launching the city into its third century. This 199th birthday celebration featured gourmet cake prepared by students of The International Culinary School of The Art Institute of California – Inland Empire, kicking off festivities through July 4 of 2010, marking the city’s 200th year.

Rabbi Hillel Cohn, a 47-year resident of San Bernardino, and for 38 years head of Temple Emanu El, is chairman of the Bicentennial Committee, and has plans to note this historic event “in neighborhoods, on the streets, in public venues, through the airwaves and on the Internet,” debuting the celebration’s unique logo and announcing the event’s motto —  “San Bernardino 1810-2010: A Rich History. A Bright Future.”

“I was asked by a member of the City Council in 2007 to get involved since I’d also worked on the previous U.S. Bicentennial,” he recalls. “The mayor and Common Council formed an ad hoc committee to begin celebration plans and start raising funds, and in July of that year I was chosen chairperson.”

The 2010 months-long festivities debut February 18 with a public performance of “Legend of the Arrowhead” at California Theater. The historical musical satire focuses on the mysterious “arrowhead” on the San Bernardino Mountains, and is produced by the city’s Economic Development Agency.

In March and April of 2010 the city will conduct numerous beautification events and spearhead the March planting of, appropriately, 200 beautiful trees. On March 17, the California State University at San Bernardino hosts the 23rd Annual Morrow-McCombs Memorial Lecture which will explore “Can’t We All Get Along?,” reflections on 200 years of the city’s religious life.

April 12 will take a look at “Indigenous Pre-Hispanic People of San Bernardino: at the university’s Pfau Library.

The following month is slated to be a busy one, too. On May 1, the San Bernardino Symphony will perform a “Celebrate America” concert at the California Theater in honor of the city’s birthday as well as for the centennial of the Community Hospital of San Bernardino.

More music will highlight May 7 and 8 with an adaptation of Mozart’s opera “Cossi Fan Tutte” at the university’s P.A. Recital Hall.

Railroad buffs will be thrilled May 8 and 9 when the celebration debuts Railroad Days at the San Bernardino History and Railroad Museum. “We’ll be bringing in steam locomotive # 3150,” Cohn says, “which actually used to serve the city.”

May 15th will launch a “countdown” celebration with an elaborate gala at the National Orange Show Events Center, with the 16th capped by a Bicentennial Mayor’s Run downtown and a Festival of Faiths at the Western Region Little League Stadium.

May 16 will also include a Youth Safety Expo at Arrowhead Credit Union Park.

The Bicentennial Parade will start at 7th and E Street, ending at Meadowbrook Park, on May 22, the theme being San Bernardino from its 1810 beginning and looking toward its future. Rabbi Cohn points out, “A unique part of the parade will be the Mormon church entry with relics and costumes of the city’s earliest pioneers.”

June 17-19 will see another unique event when the city introduces the “San Bernardino’s Got Talent” competition at a location to be determined.

The exciting festivities conclude on July 4th at the 66ers Stadium in the Arrowhead Credit Union Park with a fireworks display unlike any the city has previously seen.

As if all this weren’t enough to highlight the San Bernardino’s history, a Youth Bicentennial Committee is planning even more activities and events.

In a letter read at the May 20th, 2009 launching, Governor Arnold Schwarzenegger wrote, “As one of California’s oldest communities, San Bernardino has played an important role in the history of our state. I commend all of the men and women – past and present – who have made your city the fantastic place it is today, and applaud those who carry on a legacy of hard work and accomplishment.”

These members were appointed by the mayor and members of the San Bernardino Common Council. Additional community volunteers who have taken on leadership of other committees are: Trudy Freidel (Festival of Faiths), Dr. William Coleman (Leadership Cabinet), Peggi Hazlett (Mayor’s Run), Dr. Charles “Skip” Herbert (Coloring Books for Schools) and The Art Institute of California – Inland Empire (Design).