Written by Admin on January 21, 2010. Posted in The Salvation Army 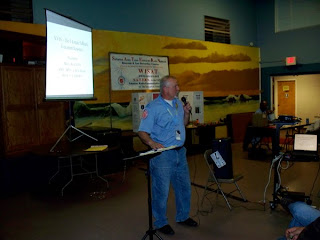 A member of SATERN (Salvation Army Team Emergency Radio Network) presents information during the 2009 seminar. A new seminar, with all new workshops about SATERN and what it does for the community, takes place Jan. 30 at the San Bernardino Corps, 746 W. Fifth St.

(SAN BERNARDINO, Calif.) – Anyone interested in amateur radio is invited to learn how to help one of the world’s oldest disaster relief organizations in its communications efforts.

The Inland Empire’s Salvation Army Team Emergency Radio Network, also known as SATERN, will hold its 14th Annual Introduction and Seminar on Saturday, Jan. 30. This free event takes place from 8:30 p.m. to 2 p.m. at the Salvation Army San Bernardino Corps, 746 W. Fifth St., San Bernardino. It’s open to the public and includes a complimentary lunch.
SATERN relies on amateur or shortwave radio, a technology that’s been around since before World War II, but is growing more sophisticated. These radios allow two-way communication across areas of about 200 miles, so SATERN uses them to communicate among its own members who are participating in a Salvation Army disaster relief effort, and with the emergency workers they’re helping.
The Salvation Army has helped in just about every disaster that has broken out over the last century, including fires such as the ones that burned in much of the Angeles National Forest this year, earthquakes, floods and the Sept. 11, 2001 terrorist attacks.
“Amateur radio is a great hobby and participating in SATERN is a great way to turn that hobby into something that helps our Inland Empire tremendously,” said Tony Stephen, Inland Empire SATERN Committee member.  “If more people join us, we will be able to deliver communications more effectively during the next fire or other disaster that hits our area.”

After a sign-in time, the seminar gets underway at 9 a.m. The first speakers are Trace Wilette, a member of the Inland Empire’s SATERN committee, Carl Gardenias of the American Radio Relay League and Capt. Stephen Ball, executive officer of the San Bernardino Corps. They will provide an introduction to SATERN.

American Radio Relay League is an amateur radio organization separate from The Salvation Army, but whose members also are involved in disaster relief.
From 11 a.m. to 12 noon, Commissioner Phillip Swyers of The Salvation Army’s Western Territory and Major Linda Markiewicz, divisional commander of the Sierra Del Mar Division of The Salvation Army will speak on “Ready to Serve.”
They will explain how SATERN provides vital communication services on several fronts during disasters, such as between its own members, to the rescue workers they’re assisting and to the public. Rescue workers frequently rely on SATERN to help those displaced in a disaster communicate their whereabouts to out-of-town family, and to provide media with information that will help keep everyone safe and well-informed.
The seminar also includes two workshops on technical aspects of amateur radio, and a complimentary lunch.
So it will have an accurate lunch count, SATERN asks those attending to RSVP, either by email, phone, or amateur radio to one of the following members:
Tony Stephen, ke6jzf@verizon.net,  (909) 628-2843, KE6JZF.
Tony Straughter, revmass@verizon.net, (909) 980-9691, KA6YEZ
Bob Booth, w6qed@verizon.net, (909) 886-0215, W6QED
Paul Hager, paulhager@gmail.com, (909) 338-0319, AE6TR
Trace Willette, ki6dpn@arrl.net, (909) 800-1681, KI6DPN
Fred Steig, kt6k@msn.com, (909) 886-7844, KT6K
For more information go to the website www.satern.net
About the Salvation Army San Bernardino Corps
The Salvation Army may be able to provide emergency services including food; lodging for homeless or displaced families; clothing and furniture; assistance with rent or mortgage and transportation when funds are available. The Salvation Army Team Radio Network assists rescue workers and evacuees in such disasters as fires.
The Salvation Army is an evangelical part of the Universal Christian Church, and also offers evangelical programs for boys, girls and adults. One of the largest charitable and international service organizations in the world, The Salvation Army has been in existence since 1865 and in San Bernardino since 1887, supporting those in need without discrimination. Donations may always be made online at www.salvationarmyusa.org or by calling 1-(800)-SAL-ARMY.