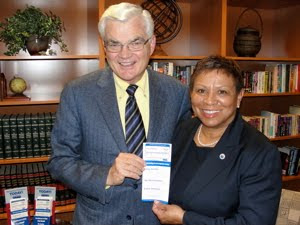 Riverside Mayor and National League of Cities Chairman Ron Loveridge and Rialto Council Member Deborah Robertson, with samples of the  prescription discount cards available to residents of both their cities and several others in southern California. The cities offer the discounts through a program of the National League of Cities. Photo by Carl Dameron
(RIALTO, Calif.) The City of Rialto is offering its residents a free card that provides savings of up to 20 percent on prescription drugs purchased at CVS and other major pharmacies.
“One card serves an entire family,” said Council Member Deborah Robertson. “They will save up to 20 percent on any medications any family member needs, some of which cost as much as $2000 a month.”
Robertson noted that sometimes, prescriptions help people prevent onset of a serious health problem. This card is part of a program the city has called “Healthy Rialto,” which is committed to giving city residents the tools they need to stay healthy.
“Prevention is so important to having a healthy city,” Robertson said. “It’s more than treating illness in the hospital; it’s also working to prevent illness from happening.”
Rialto offers this card through a program of the National League of Cities, which the league created with help from CVS Pharmacy. It is for families and individuals who do not have insurance providing prescription drug coverage.
In Rialto, the card is available at the Rialto Civic Center, 150 S. Palm Ave., and the Rialto Chamber of Commerce, 120 N. Riverside Ave.
Rialto residents may also call Rialto’s Human Resources Department at (909) 820-2540 and ask for Betty for more information.
Another Inland Empire city offering the program is Riverside, whose Mayor Ron Loveridge serves as the current chairman of the National League of Cities. Robertson worked with him to bring the program to Rialto.
“I really compliment Deborah Robertson for seeing and seizing this opportunity to serve the citizens of Rialto,” Loveridge said.
In Rialto, the card is accepted at CVS, Walgreen’s, Wal-Mart, Rite-Aid, Foothill Pharmacy, Rialto Vista Pharmacy, ABC Pharmacy and North Rialto Drugs.
Besides Riverside and Rialto, the National League of Cities website identifies other Inland Empire cities offering the program as Cathedral City and Murrieta in Riverside County and Fontana and Grand Terrace in San Bernardino County.
In Los Angeles County, it identifies the cities of Baldwin Park, Bellflower, Claremont, Culver City, Duarte, Lynwood, Rosemead, South El Monte and West Hollywood as offering the program.
Residents of these cities should contact their City Hall for more information.
“Prescription drugs cost a lot of money,” Robertson said. “If a family spends $100 on prescription drugs then they could save $20. That could be spent on the electric bill, gas bill or other bills.”
“Across the country cities that have been involved with this program have seen the savings and they are very appreciative,” Mayor Loveridge said.
-end-