Bicentennial Begins With The Legend of the Arrowhead

Written by Admin on January 29, 2010. Posted in Bicentennial

San Bernardino’s Historic California Theater will host “The Legend of the Arrowhead” on Feb. 18. This performance tells the history of San Bernardino in a theatrical musical written by former resident Heather McCluskey, and produced by the San Bernardino Economic Development Authority. 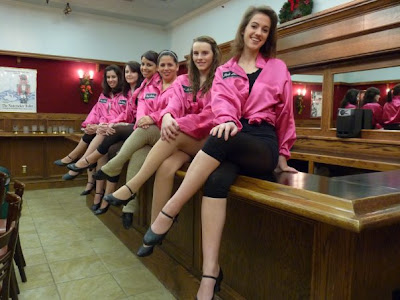 The Pink Ladies will appear in “The Legend of the Arrowhead” a play being produced by the San Bernardino Economic Development Authority, originally written by former San Bernardino resident Heather McCluskey. The performance takes place Feb. 18 at the California Theater.

(SAN BERNARDINO, Calif.) The city of San Bernardino’s Bicentennial kicks off Thursday, February 18 at The California Theatre of the Performing Arts at 8 p.m. in downtown San Bernardino with “The Legend of the Arrowhead,” an original musical written by Heather McCluskey.
“The historical musical tells the story of a stage production in progress, as the director and producer of the show explain San Bernardino’s origins. The show highlights the lusty caballeros, the pioneer settlers, and the Arrowhead Springs Hotel,” said Lori Tillery.
“Travel back in time to see familiar faces come to life, Wyatt Earp, Lillian Russell and Dr. Martin Luther King. This fast paced, musical satire comedy speaks to anyone looking for a fun and enjoyable night at the theatre,” said Colin Strange.
Colin Strange and Lori Tillery are the executive producers of the event. They work for the San Bernardino Economic Development Agency, which is sponsoring the production on behalf of the Bicentennial Committee.
“The musical satire focuses on the mysterious arrowhead in the San Bernardino Mountains,” said Strange.
The historic California Theatre is a 1,718-seat auditorium built in 1928 as a vaudeville movie palace. Currently the theatre hosts a wide range of performance types including musicals, plays, symphonies, celebrity headliners, concerts, children’s theatre, ballet, recitals, fashion shows, corporate seminars, graduation exercises and naturalization ceremonies.
Ticket prices for The Legend of the Arrowhead are $18 per ticket at the door the night of the event or they can be purchased on Ticketmaster.com.
For more information on The Legend of the Arrowhead contact Lori Tillery at (909) 663-1044 or at ltillery@sbrda.org.
For more information on The California Theatre of Performing Arts visit their website at www.californiatheatre.net or call (909) 663-2293.
The Bicentennial festivities continue in March and April of 2010, when the city will conduct several beautification events and spearhead the planting of 200 trees.
On March 17, California State University at San Bernardino hosts the 23rd Annual Morrow-McCombs Memorial Lecture, which will explore “Can’t We All Get Along?” Bicentennial Committee Chairman Rabbi Hillel Cohn’s reflections on 200 years of the city’s religious life.
April 12 will take a look at “Indigenous Pre-Hispanic People of San Bernardino: at the university’s Pfau Library.
The following month is slated to be a busy one. On May 1, the San Bernardino Symphony will perform a “Celebrate America” concert at the California Theater in honor of the city’s birthday as well as for the centennial of the Community Hospital of San Bernardino.
More music will highlight May 7 and 8 with an adaptation of Mozart’s opera “Cossi Fan Tutte” at the university’s P.A. Recital Hall.
May 8 and 9, the celebration debuts Railroad Days at the San Bernardino History and Railroad Museum. “We’ll be bringing in steam locomotive # 3150,” Cohn says, “which actually used to serve the city.”
May 15th will launch a “countdown” celebration with an elaborate gala at the National Orange Show Events Center, with the 16th capped by a Bicentennial Mayor’s Run downtown and a Festival of Faiths at the Western Region Little League Stadium.
May 16 will also include a Youth Safety Expo at Arrowhead Credit Union Park.
There will be a Centennial Monument rededication as well as a Bicentennial Monument dedication on May 20 at Inland Center Drive and I Street.
The Bicentennial Parade will start at 7th and E Street, ending at Meadowbrook Park, on May 22. The theme focuses on San Bernardino from its 1810 beginning and looks toward its future. Rabbi Cohn points out, “A unique part of the parade will be the Mormon church entry with relics and costumes of the city’s earliest pioneers.”
June 17-18 will see another unique event when the city introduces the “San Bernardino’s Got Talent” competition at a location to be determined.
The Bicentennial festivities continue on July 4th at the 66ers Stadium in the Arrowhead Credit Union Park, the 4th of July Extravaganza with a fireworks display unlike any the city has previously seen.
The Stater Bros. Route 66 Rendezvous and other events taking place throughout 2010 will also feature a Bicentennial theme, keeping the celebration alive throughout the year.
Sponsors of the Bicentennial Celebration, in addtittion to the City of San Bernardino are: San Manuel Band of Mission Indians, Stater Brothers Market, Burlington Northern Santa Fe Railroad, Southern California Edison, Community Hospital of San Bernardino, Vanir Development, Matich Corporation, Erin Brinker and; Associates, Dameron Communications, San Bernardino Sunset Rotary and San Bernardino Economic Development Agency.
Rabbi Hillel Cohn is the chairman of the Bicentennial Celebration Committee, and Erin Brinker is the chair of its Public Relations & Marketing and Independence Day Extravaganza committees. Other Bicentennial Celebration Committee members are Jim Smith (chair of the Community Engagement committee), Cheryl Brown (chair of the Youth Council, Intergovernmental and Arts committees), Beverly Bird (chair of the Legend of the Arrowhead committee), Steven Shaw (chair of the History committee), David Smith (chair of the Finance committee), Jane Sneddon (chair of the Parade committee) and Martha Pinkney (chair of the Gala committee.)
The mayor and members of the San Bernardino Common Council appointed these members. Additional community volunteers who have taken on leadership of other committees are: Trudy Freidel (Festival of Faiths), Dr. William Coleman (Leadership Cabinet), Peggi Hazlett (Mayor’s Run), Dr. Charles “Skip” Herbert (Coloring Books for Schools) and The Art Institute of California – Inland Empire (Design).
For additional details, contact Erin Brinker at (951) 323-9337 or go to www.sanbernardino200.org.
-end-