Written by Admin on March 11, 2010. Posted in Bicentennial 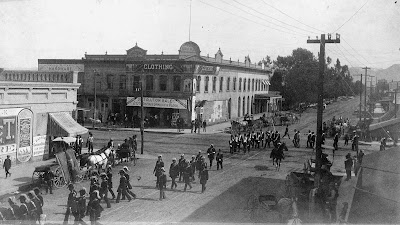 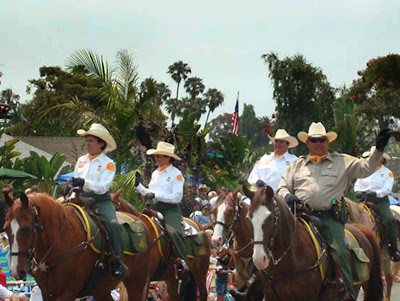 Parades have been celebrated in San Bernardino for many of the 200 years the city has been known by that name. A parade marking San Bernardino’s Bicentennial  takes place Saturday, May 22.
SAN BERNARDINO, Calif. (March 8, 2010) The City of San Bernardino continues its 200th anniversary celebration with a parade marking the city’s Bicentennial.
The parade, which is being organized by the Bicentennial Parade Committee, starts Saturday, May 22 at 7th & “E” Streets, ending at Meadowbrook Park. The festivities begin at 12 noon and conclude at 9 p.m. The parade itself begins at 4 p.m.
“Entries may include floats, marching bands, horse drawn vehicles, marching groups such as drill teams, drum squads, walking groups, mascots, vintage vehicles, re-enactors and equestrian groups,” said Jane Sneddon, chair of the Parade Committee. For an application go to www.sb200.org or call Sneddon at 909.289.2730.
“A Rich History, A Bright Future” the overall Bicentennial Celebration’s theme, is also the theme of the parade,” said Rabbi Hillel Cohn, Bicentennial Committee Chairman. “This history begins with the presence of the Serrano Indians, the indigenous Native American population. In 1810 Father Dumetz came to the valley and named it. The parade will portray the early history as well as more recent history and will end with San Bernardino’s bright future.”
Entries currently include floats of the San Manuel Band of Mission Indians, a depiction of the first Mass in 1810, the arrival of the Mormon pioneers, the Jewish community and African-Americans.  There will also be an entry from the National Orange Show, a 1910 buggy used by the mayor in the city’s centennial parade and five marching bands from the San Bernardino Unified School District.
Throughout the day there will be food and merchandise vendors, a mini-carnival and entertainment provided by the Redlands 4th of July Band, San Bernardino High School Jazz Band and The Main Street Community Band. After the parade, floats will be on display at the park.
Other upcoming Bicentennial Celebration Events:
In March and April of 2010, the city will conduct beautification events including spearheading the planting of 200 trees.
On March 17, California State University at San Bernardino hosts the 23rd Annual Morrow-McCombs Memorial Lecture, which will explore “Can’t We All Get Along?” Bicentennial Committee Chairman Rabbi Hillel Cohn’s reflections on 200 years of the city’s religious life.
April 12 will take a look at “Indigenous Pre-Hispanic People of San Bernardino” at the university’s Pfau Library.
On May 1, the San Bernardino Symphony will perform a “Celebrate America” concert at the California Theatre of Performing Arts in honor of the city’s birthday as well as for the centennial of the Community Hospital of San Bernardino.
More music will highlight May 7 and 8 with an adaptation of Mozart’s opera “Cossi Fan Tutte” at the University’s P.A. Recital Hall.
May 8 and 9, the celebration debuts Railroad Days at the San Bernardino History and Railroad Museum at the historic Depot. “We’ll be bringing in steam locomotive Santa Fe  3750,” Cohn says, “which actually used to serve the city.”
May 15th will launch a “countdown” celebration with an elaborate gala at the National Orange Show Events Center, with the 16th capped by a Bicentennial Mayor’s Run and Youth Safety Expo at Arrowhead Credit Union Park and a Festival of Faiths at the Western Region Little League Stadium.
There will be a Centennial Monument rededication as well as a Bicentennial Monument dedication on May 20 at Inland Center Drive and “I” Street.
June 17-18 will see another unique event when the city introduces the “San Bernardino’s Got Talent” competition at a location to be determined.
The Bicentennial festivities continue on July 4th at the 66ers Stadium in the Arrowhead Credit Union Park, the 4th of July Extravaganza with a fireworks display unlike any the city has previously seen.
The Stater Bros. Route 66 Rendezvous, the Western Regional Little League Tournament and other events taking place in the latter part of 2010 will also feature a tie-in to San Bernardino’s Bicentennial, keeping the celebration alive throughout the year.
Rabbi Hillel Cohn is the chairman of the Bicentennial Celebration Committee, and Erin Brinker is the chair of its Public Relations & Marketing and Independence Day Extravaganza committees. Other Bicentennial Celebration Committee members are Jim Smith (chair of the Community Engagement committee), Cheryl Brown (chair of the Youth Council, Intergovernmental and Arts committees), Beverly Bird (chair of the Legend of the Arrowhead committee), Steven Shaw (chair of the History committee), David Smith (chair of the Finance committee), Jane Sneddon (chair of the Parade committee) and Martha Pinkney (chair of the Gala committee.) The mayor and members of the San Bernardino Common Council appointed these members.
Additional community volunteers who have taken on leadership of other committees are: Trudy Freidel (Festival of Faiths), Edward Martinez (Leadership Cabinet), Peggi Hazlett (Mayor’s Run), Dr. Charles “Skip” Herbert (Coloring Books for Schools), Karen Blanco (Media) and The Art Institute of California – Inland Empire (Design).
For additional details, contact Erin Brinker at (951) 323-9337 or go to http://sanbernardino200.org