Written by Admin on March 24, 2010. Posted in Taylion Virtual Academy 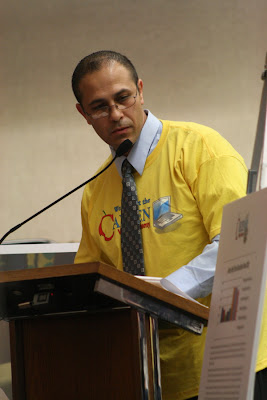 Jamie Crispin, principal of E-Institute High School in the Phoenix, Arizona area, tells the San Bernardino City Unified School District governing board about the success his school has had, and how  the founding group could similarly help students in San Bernardino with Carden Virtual Academy. Photo by Chris Sloan 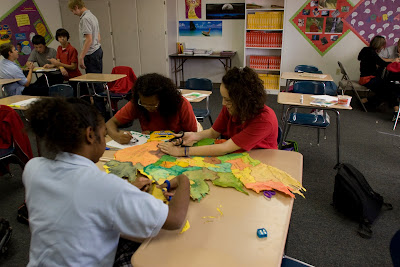 Carden’s Arizona students take state reading and math tests in the third, eighth grades and 10th grades. In 2008 the Carden Traditional Schools had 100 percent mastery of these tests in some cases, and no less than 80 percent in all other cases.

(SAN BERNARDINO, Calif.) A charter school that has helped elementary, middle and high school students in Arizona raise their state test scores and graduation rates plans to open in San Bernardino in August 2010.


“Carden Virtual Academy is not new to education,” said Executive Director Tim Smith. “We have a 14-year history of graduating 85 to 100 percent of our students in Arizona, and of producing state test scores that are well over the state average.”


Carden Virtual Academy will serve all students, kindergarten through 12th grade, in the San Bernardino City Unified School District. It will offer individualized education plans, which can include on-campus classes and online classes.


The school’s curriculum will be based on California education standards, and employ California certified teachers.


“Carden Virtual Academy’s mission is to deliver a high quality education focused on building skills, character and confidence,” Smith said. “The curriculum will be personalized for each student, offering a mix of onsite classes in day and evening hours, online classes and independent study. Onsite courses will include hands-on learning activities and high technology.”


“E-Institute Charter High School, which opened in 2000, has a proven track record of successfully serving high school students that may be at risk of dropping out of school or not successfully completing school,” Smith said. “It uses a “hybrid” approach – in-class instruction led by a teacher, combined with personalized computer learning.”


Arizona students take state reading and math tests in the third, eighth grades and 10th grades. In 2008 the Carden Traditional Schools had 100 percent mastery of these tests in some cases, and no less than 80 percent in all other cases.


Combined, the test results for Carden Traditional School of Surprise have qualified this campus for an elite list of Arizona’s “high-performing” schools. It is also the first charter school in Arizona to offer the International Baccalaureate Middle Years program.


In 2000, the founders of International Studies Academy decided they needed to help the many Phoenix-area students who weren’t planning to go to college. This group developed the first campus of E-Institute Charter School, thus expanding the high school program to meet the needs of all students in the Phoenix area.


Since then, it has added two new campuses of E-Institute Charter Schools, one in the Phoenix metro area and another in Surprise.