Written by Admin on April 27, 2010. Posted in Bicentennial 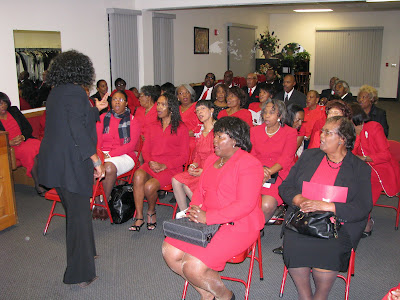 Choir members from New Hope Missionary Baptist Church practice for a recent concert.  Join us to share the Festivals of Faiths with many choirs, dance teams and instrument players from throughout San Bernardino on Sunday, May 16 at the Western Region Little League Stadium at 3 p.m.

SAN BERNARDINO, Calif. (April 16, 2010) – Since May 20, 1810, when Father Francisco Dumetz founded a Catholic mission in what was then almost entirely a Native American community, San Bernardino has had a diversity of faiths.

Sunday, May 16, 2010 people of San Bernardino’s many faiths will come together in celebration of the city’s history and future, as part of the city’s year long Bicentennial Celebration. The Festival of Faiths, a free event, will be held at the Western Region Little League Stadium, 6707 Little League Dr. The program will take place from 3 p.m. to 4:30 p.m. and will be followed by the “Sharing of Food and Friendship” from 4:30 p.m. to 5:45 pm. There is ample parking at the stadium.

“It is a celebration of the many different faiths in San Bernardino,” said the Rev. Petra Malleis-Sternberg, pastor of First Congregational United Church of Christ, and co-chair of the Bicentennial Celebration’s Festival of Faiths committee. “We also are recognizing the many ways these different congregations have served the city of San Bernardino over the last 200 years.”

Every religious congregation identified by the Festival of Faiths committee has been invited to participate in this event. If any congregation has not been invited, a leader should call Rev. Malleis-Sternberg at (909) 886-4911.

The event starts at 3 p.m. with each participating congregation participating in Opening Ceremonies. A pastor or other congregational leader, and at least one youth representative will parade into the Little League stadium, carrying a banner to identify their congregation.

After the participating congregations are recognized, some of them will provide musical entertainment. This includes choirs, praise bands, dance teams and prayers and readings that are chanted or sung.
On conclusion of the entertainment portion of the Festival of Faiths, all will adjourn to the area surrounding the stadium for the “Sharing of Food and Friendship.” Congregations will offer taste-sized portions of food from their unique cultures.

“This is like one big coffee hour,” the Rev. Malleis-Sternberg said. “Our local synagogue plans to offer tastes of bagels, lox, and sweets. Other religious groups will share Middle Eastern barbecue, Latin American flavors, and regional treats from the United States.”

Also, during this final hour, children will be encouraged to draw their vision for San Bernardino’s future on a mural. Paper and markers will be supplied.

Local congregations that have buses or vans are being invited to provide transportation to and from the event from key locations in San Bernardino. These locations will be announced a week before the event.
Other upcoming Bicentennial Celebration Events:

On May 1, the San Bernardino Symphony will perform a “Celebrate America” concert at the California Theatre of Performing Arts in honor of the city’s birthday as well as the centennial of the Community Hospital of San Bernardino.
More music will be performed May 7 and 8 with an adaptation of Mozart’s opera “Cossi Fan Tutte” at California State University San Bernardino’s P.A. Recital Hall.

May 15th current and former residents join together at an elegant gala at the National Orange Show Events Center, with the 16th capped by a Bicentennial Mayor’s Run and Youth Safety Expo at Arrowhead Credit Union Park.

The Bicentennial Parade will start at 7th and E Street, ending at Meadowbrook Park, on May 22 focusing on San Bernardino from its beginnings as a Native American settlement centuries ago, to the present and future.

The Bicentennial festivities continue on July 4th at the 66ers Stadium in the Arrowhead Credit Union Park, the 4th of July Extravaganza with a fireworks display unlike any the city has previously seen.