Written by Admin on May 4, 2010. Posted in Bicentennial 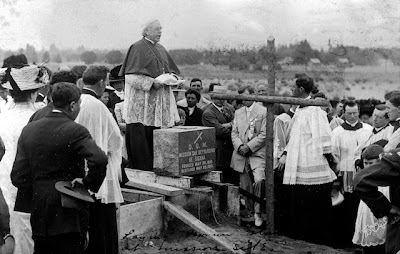 SAN BERNARDINO, Calif. (May 4, 2010) On May 20, 2010, at 10 a.m. the Bicentennial celebration will recognize the place and the date where the name “San Bernardino” began 200 years ago by dedicating two monuments in a street side ceremony. It will re-dedicate the 1910 Centennial Monument and dedicate a similar 2010 Bicentennial Monument.

Inland Center Drive and “I” Street is a busy intersection near a freeway, a regional shopping center and a college, all symbols of a successful city.

History records that Francisco Dumetz, a Franciscan padre, established a capilla (small chapel) on May 20, 1810, not far from what is now the intersection of these two busy streets. On the same day, he named the entire valley before him “San Bernardino” to honor the patron saint of that day.

The Bicentennial Committee and the Diocese of San Bernardino share in organizing this event, which also recognizes the 200th anniversary of Catholicism in San Bernardino Valley.

A diversity of faiths are involved in the Bicentennial monument dedication. Rabbi Hillel Cohn will serve as Master of Ceremonies. Cohn is the chairman of the Bicentennial Celebration committee, which is organizing numerous celebratory events in 2010 to commemorate the city’s 200th birthday.

Peter Bradley, archivist of the Dioces of San Bernardino will present a brief history of the site and the ceremonies that marked the centennial in 1910.,

Elected officials will present resolutions and proclamations marking San Bernardino’s bicentennial to Mayor Patrick Morris Bishop Gerald Barnes, head of the diocese of San Bernardino will lead a liturgical celebration, which will include with hymns and Psalms. He will also offer a homily for the occasion and conduct the rededication of the 1910 monument and the dedication of the 2010 monument.

Native Americans will bless the location with sacred music and dance.

“This monument is where it is believed the first Catholic Mass was given in San Bernardino Valley by Father Dumetz,” said John Andrews, director of communications for the Diocese of San Bernardino. “It was on that very day he gave San Bernardino its name.”

Catholics in San Bernardino organized a similar celebration on May 20, 1910.

According to newspaper accounts, the Centennial celebration also included a dedication of the newly built chapel for the parish of St. Bernadine de Siena. This was followed by an “automobile parade” from St. Bernadine’s (still standing and still in use) chapel at Fifth and F Streets to the location where Father Dumetz built the capilla 100 years before.

Leading both ceremonies was Bishop Thomas J. Conaty, head of what was then known as the Diocese of Monterey-Los Angeles, an entity serving all Catholic churches in California.

“The Centennial monument will be returning to a spot near its original location,” said Steve Shaw, president of the San Bernardino Historical Society, which is working with the Diocese of San Bernardino to plan this event. “It was there from 1910 through the 1960s or 1970s, but then had to be moved as development of the area occurred.”

From then until about 1990, the monument stood in front of the nearby St. Prophet Elias Greek Orthodox Church at 1035 Inland Center Drive. This church rescued the monument from demolition.

“Then the Centennial monument was hit by a car, “ Shaw said. “The engraved granite block was not damaged, but the concrete block it rested on was. Since then, the granite block has been on display at the San Bernardino Historical Society Museum.”

The Bicentennial monument is similar in design, Shaw said. Both weigh about 700 lbs. each, and both are 18” x 24” x 14”. Before the ceremony, they will be placed on a single concrete block near Inland Center Drive’s bicycle path, where, it is hoped, they will be safe for centuries to come. The base for the two monuments has been constructed by the Matich Corporation.

Music will be performed May 7 and 8 with an adaptation of Mozart’s opera “Cossi Fan Tutte” at the California State University San Bernardino’s P.A. Recital Hall.

May 15th current and former residents join together at an elegant gala at the National Orange Show Events Center, with the 16th capped by a Bicentennial Mayor’s Run and Youth Safety Expo at Arrowhead Credit Union Park and a Festival of Faiths at the Western Region Little League Stadium.

The fun continues at the Bicentennial Parade and Celebration on May 22 beginning in Meadowbrook Park. Throughout the day there will be food, merchandise vendors and mini-carnival. After the parade, floats will be on display. The Parade begins at 4:00 p.m. at 7th and “E” Street.

Join the contestants at the San Bernardino’s Got Talent Show on June 19 at the Sturgess Center of Performing Arts where the finalists will perform their acts. Winners will be announced at this event.

The Bicentennial festivities continue on July 4th at the 66ers Stadium in the Arrowhead Credit Union Park, is a 4th of July Extravaganza with a fireworks display unlike any the city has previously seen.