Written by Admin on May 5, 2010. Posted in Bicentennial 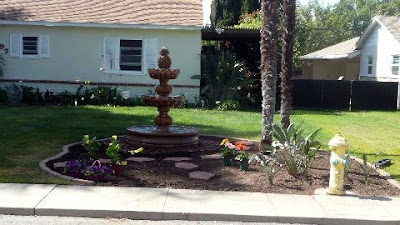 Ron and Shirley White won the Single Family Category for the improvements to their home. Photo courtesy of Bicentennial Celebration

Luis Campos is the winner of the Multi-Family category in the Neighborhood Beautification contest, for improvements he made to this apartment complex. Photo courtesy of Bicentennial Celebration. 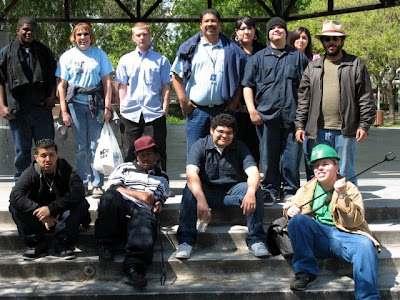 Boy Scout Troop 434 and the DMV Neighborhood Association joined with St. John’s Episcopal Church to plant drought-tolerant plants, paint the sign and improve the courtyard and recreational facilities at the church. Photo courtesy of Bicentennial Celebration 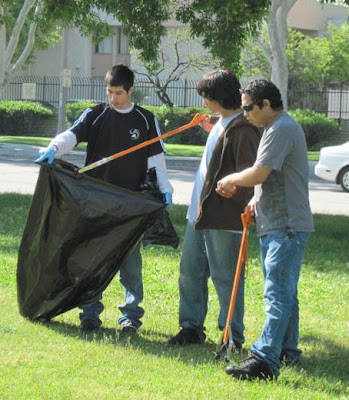 More than 70 employees of Kohl’s Department Stores helped clean up Little League Field at Waterman and Sixth streets as part of the Neighborhood Beautification contest. They are the winners in the Business Category. Photo courtesy of Bicentennial Celebration 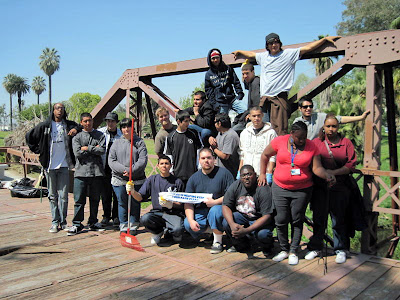 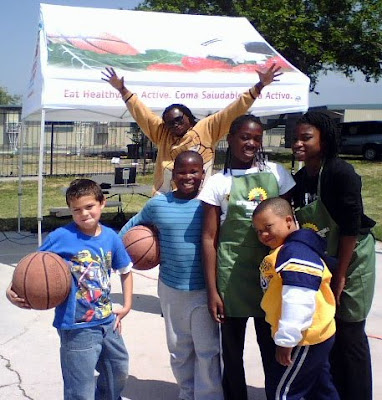 Children celebrate after they helped in a neighborhood clean-up at Anne Shirell Park as part of the Neighborhood Beautification contest. Photo courtesy of Bicentennial Celebration. 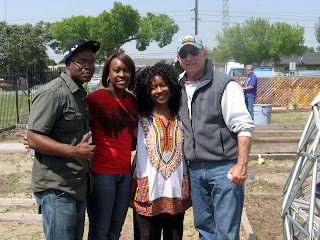 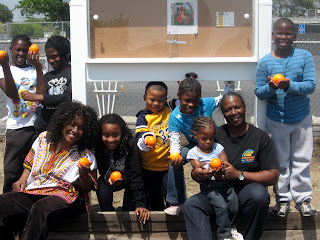 The Rev. Bronica Martindale (front left) and neighborhood children show off the oranges they’ve grown in the Westside Community Garden, which was spruced up by several community groups who participated in the Neighborhood Beautification contest. Photo courtesy of Bicentennial Celebration

In the Residence/Neighborhood Block category, Robert  and Shirley White were selected for landscaping completed at their Maywood Avenue home.

In the Multi-Family Dwelling Category, Luis Campos was selected for improvements made to his property on W. 9th Street.
Kohl’s Department Stores Distribution Center won in the Business category. More than 70 Kohl’s employees and family members worked at the Little League field at Waterman and 6th Street, fertilizing the field, planting trees, picking up trash, painting the stands and repairing snack bars. They also donated $1,500 to the Little League.

“These were true collaborative efforts involving many groups and community members,” Beautification Committee Co-Chair John Traubert explained. “We were so impressed at the number of volunteers involved and the scope of the projects that we wanted to recognize all three groups.”

Hundreds of volunteers took part in the event, which saw residents and volunteers landscaping, weeding and cleaning up the city in preparation for the many Bicentennial events taking place in May and throughout 2010.

Participants submitted “before” and “after” photos of projects they completed, and judges selected the winners in four different categories.

Jean Bulinski and John Traubert chair the Beautification Committee and said they were pleased with the participation.
“We were excited that so many people wanted to get involved and do something to help make our city a better place to live,” Bulinski said.

“A number of the projects had been planned for some time, but as things got rolling we had people calling and asking what they could do to help,” said Traubert. “It was nice to be able to connect those volunteers with projects that needed assistance.”

Inland Empire Job Corps Center sent students, teachers and staff members around the city to work on several projects. They cleaned up debris and cleared flower beds at Secombe Lake and Meadowbrook Park. They cleaned up areas of the Little League Western Regional Headquarters and had teams removing graffiti, picking up debris along Cajon Boulevard and planting trees and flowers at Muscoy Methodist Church.

Boy Scout Troop 434 and the DMV Neighborhood Association joined with St. John’s Episcopal Church to plant drought-tolerant plants, paint the sign and improve the courtyard and recreational facilities at this site, which provides services to many in the community.

“It was very rewarding to be part of all this,” said Bulinski. “And we hope the momentum keeps going. There are plenty of opportunities for people to help make our community a better place to live.”
In addition to the beautification contest, April featured a special beautification day coordinated by the Mayor’s office for residents to bring bulky refuse, including electronic waste and tires. Seven sites were set up and staffed by Neighborhood Cluster Associations and other volunteers.

Music will be performed May 7 and 8 with an adaptation of Mozart’s opera “Cossi Fan Tutte” at the California State University San Bernardino’s P.A. Recital Hall.

May 15th current and former residents join together at an elegant gala at the National Orange Show Events Center, with the 16th capped by a Bicentennial Mayor’s Run and Youth Safety Expo at Arrowhead Credit Union Park and a Festival of Faiths at the Western Region Little League Stadium.

The fun continues at the Bicentennial Parade and Celebration on May 22 beginning in Meadowbrook Park. Throughout the day there will be food, merchandise vendors and mini-carnival.  After the parade, floats will be on display.  The Parade begins at 4:00 p.m. at 7th and “E” Street.

Join the contestants at the San Bernardino’s Got Talent Show on June 19 at the Sturges Center of Performing Arts where the finalists will perform their acts.  Winners will be announced at this event.

The Bicentennial festivities continue on July 4th at the 66ers Stadium in the Arrowhead Credit Union Park, is a 4th of July Extravaganza with a fireworks display unlike any the city has previously seen.

The Stater Bros. Route 66 Rendezvous, the Western Regional Little League Tournament and other events taking place in the latter part of 2010 will also feature a tie-in to San Bernardino’s Bicentennial, keeping the celebration alive throughout the year.
Rabbi Hillel Cohn is the chairman of the Bicentennial Celebration Committee, and Erin Brinker is the chair of its Public Relations & Marketing and Independence Day Extravaganza committees. Other Bicentennial Celebration Committee members are Jim Smith (chair of the Community Engagement committee), Cheryl Brown (chair of the Youth Council, Intergovernmental and Arts committees), Beverly Bird (chair of the Legend of the Arrowhead committee), Steven Shaw (chair of the History committee), David Smith (chair of the Finance committee), Jane Sneddon (chair of the Parade committee), Martha Pinckney (chair of the Gala committee.) and John Valdivia. The mayor and members of the San Bernardino Common Council appointed these members.
Additional community volunteers who have taken on leadership of other committees are: Rev. Malleis-Sternberg (Festival of Faiths), Edward Martinez (Leadership Cabinet), Peggi Hazlett (Mayor’s Run), Dr. Charles “Skip” Herbert (Coloring Books for Schools), Karen Blanco (Media) and Dameron Communications (Public Relations).