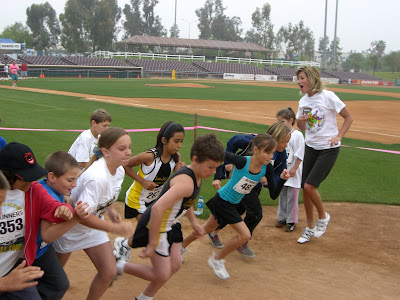 SAN BERNARDINO, Calif. (May 5, 2010) –This year’s annual Mayor’s Run celebrates San Bernardino’s 200th birthday.
The Mayor’s Run is in its eighth year, and has traditionally been held on the third Sunday in May.   Check in begins at 7:00 a.m. on Sunday, May 16 at Arrowhead Credit Union Park, 280 S. E Street.

That happens to be just four days before San Bernardino’s 200th birthday. The Bicentennial Celebration commemorates the naming of San Bernardino on May 20, 1810 by Father Francisco Dumetz.

“This year, runners can celebrate the Bicentennial with the Mayor’s Run,” said Peggi Hazlett, assistant to Mayor Patrick Morris, and the organizer of this year’s run. “It’s a fun race that takes place annually in the beautiful Arrowhead Credit Union Park, and this year, it will be even better!”

The Mayor’s Run includes 5K and 10K races, and a “Mayor’s Mile” fun run for children 14 and younger.  All start at the stadium, and finish at home plate.  The 5K and 10K races are sanctioned by the USTAF (USA Track & Field).

First, second and third place winners in each age group will receive awards. Age groups range from 14 and under to 70 and over, with all others divided by 5-year increments.

All children participating in the “Mayor’s Mile” receive a commemorative finisher’s award, regardless of place.
Everyone participating receives a t-shirt at check-in, which begins at 7 a.m. This year’s t-shirt features the Bicentennial Celebration logo.
“It’s fun for the whole family,” Hazlett said. “Plus it benefits local youth activities, and helps you stay fit and healthy.”
Entry fees are $5 for the Mayor’s Mile and $20 for either the 5K or 10K. Teams of five can enter the 5K race for $90. After May 10, the entry fees for the 5K and 10K races are $25, or $100 for a five-member team.

The Mayor’s Run also includes a youth health and safety expo.
Participants may enter by going to http://sanbernardino200.org <http://sanbernardino200.org> to download race applications. One race application per participant, plus a check, should be mailed to City of San Bernardino Mayor’s Youth Council, 1350 S. E Street, San Bernardino, CA 92408.
For more information about the runs, participants should contact Mitch Assumma at (909) 384-5233.

Other upcoming Bicentennial Celebration Events:
Music will highlight May 7 and 8 with an adaptation of Mozart’s opera “Cosi Fan Tutte” at the University’s P.A. Recital Hall.
May 8 and 9, the celebration debuts Railroad Days at the San Bernardino History and Railroad Museum at the historic Depot.  The historic Santa Fe 3751 steam locomotive will be brought to San Bernardino for this event which takes place 10:00 a.m. – 5:00 p.m. each day.
May 15 current and former residents join together at an elegant gala at the National Orange Show Events Center.  Social hour begins at 6:00 p.m. with food and entertainment continuing throughout the evening.

The Mayor’s Run is one of two Bicentennial Celebration events taking place on May 16. From 3 p.m to 5:45 p.m., the Festival of Faiths will be celebrated at the Little League Western Regional Stadium with various faith groups expressing their traditions and history in San Bernardino, and food booths to sample traditional foods of their community

There will be a Centennial Monument rededication as well as a Bicentennial Monument dedication on May 20 at Inland Center Drive and “I” Street beginning at 10:00 a.m. with a reception immediately following at the California Welcome Center, 1955 Hunts Lane, San Bernardino.
The fun continues at the Bicentennial Parade and Festival Celebration on May 22 beginning in Meadowbrook Park at noon. Throughout the day there will be food, merchandise vendors and a mini-carnival.  After the parade, floats will be on display.  The Parade begins at 4:00 p.m. at 7th and “E” Street and festivities will continue in Meadowbrook Park until 9:00 p.m.

Join the contestants at the San Bernardino’s Got Talent Show on June 19 at the Sturges Center of Performing Arts at 6 p.m. when the finalists will perform their acts.  Winners will be announced at this event.
The Bicentennial festivities on July 4th at the 66ers Stadium in the Arrowhead Credit Union Park will have live entertainment, food and a fireworks display unlike any the city has previously seen.
The Stater Bros. Route 66 Rendezvous, the Western Regional Little League Tournament and other events taking place in the latter part of 2010 will also feature a tie-in to San Bernardino’s Bicentennial, keeping the celebration alive throughout the year.

Slide show of phots from the Mayor’s Bicentennial Run