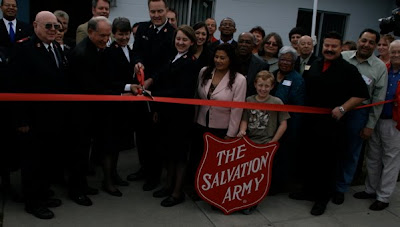 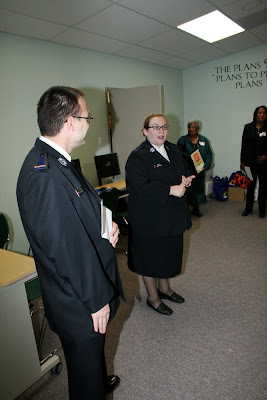 Salvation Army Cadets Ryan and Marjorie Miller explain the Salvation Army San Bernardino Corps’ plans for the new computer lab at its Hospitality House shelter. Among those hearing the plans, in background, are Assistant County Superintendent of Schools Margaret Hill and Brenda Doughty, who directs the tutoring program at Hospitality House for the San Bernardino City Unified School District. Photo by Chris Sloan

“This is a great opportunity for anyone who likes working with children, and who could give one or two hours of their time, one, two or three times a week,” said San Bernardino Corps Co-Director Capt. Nancy Ball.

“They would not need to teach or even tutor the children, as we have had a tutoring program with San Bernardino City Unified School District for many years,” she said. “The volunteers would simply help the children with their school work.”

“We also could use donations of wholesome literature books that elementary school students would enjoy reading,” Capt. Ball said. “We have many books already to read to younger children, but we want to encourage those who can already read by providing them with books geared to their age group.”

Hospitality House, the Salvation Army’s emergency family shelter, moved to its new location on Tenth Street on Feb. 1, after operating for more than two years in the San Bernardino Corps’ headquarters building, and for about 50 years prior to that at a now-demolished location on Kingman Street.

The media center and computer lab provides the children staying at Hospitality House a place to study. It is also the new home of the on-site tutoring program the San Bernardino City Unified School District has offered to children in the Hospitality House for many years, dating back to when the shelter was on Kingman Street.

These two rooms of the new Hospitality House received special attention during the remodeling of the building on Tenth Street, as Target had donated a $25,000 grant to help The Salvation Army promote children’s literacy. With the grant, it purchased the computers, a television for viewing educational videos and programs, study tables for young and older children, lighting and colorful touches, including a large mural.

To volunteer, call the San Bernardino Corps headquarters at (909) 888-1336 or email nancy.ball@usw.salvationarmy.org

The Salvation Army is an evangelical part of the Universal Christian Church, and also offers evangelical programs for boys, girls and adults. One of the largest charitable and international service organizations in the world, The Salvation Army has been in existence since 1865 and in San Bernardino since 1887, supporting those in need without discrimination. Donations may always be made online at www.salvationarmyusa.org <http://www.salvationarmyusa.org>  or by calling 1-(800)-SAL-ARMY.