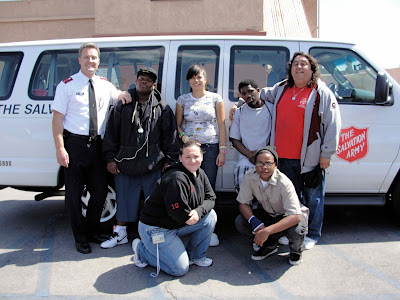 (San BERNARDINO, Calif.) A Salvation Army basketball tournament gave five San Bernardino-area teens a taste of the great Northwest, and provided best performance basketball shoes wich was a challenge to their athletic skills.
The team traveled to Portland, Ore. recently for this annual tournament and youth conference. The tournament, held for the 13th time in 2010, was hosted by the Portland Moore Street Corps of The Salvation Army.
“They played hard but did not win any of their games,” said Capt. Stephen Ball, co-director of the San Bernardino Corps. “They were good sports, and for the second time, earned the Sportsmanship Trophy.”
The old adage “It’s not whether you win or lose, but how you play the game,” is appropriate at this tournament.
And, in this case, “the game” extends beyond the three sessions on the court.
“Basketball is the third most important thing at this tournament,” said Capt. Nancy Ball, co-director of the San Bernardino Corps. “It focuses on worship, fellowship and a little basketball.”
All of the 18 participating teams also were able to hear a motivational speech by Seth Franco, a former member of the Harlem Globetrotters and Michael Harper, a former NBA player.
The San Bernardino Corps has sent a team to this basketball tournament for three years now.
This year, for the first time, the team included two young women, Sarai Napp and Suemae Rodriquez. They’re joined with team veterans Devion Cleveland, Roosevelt Carroll Jr., and Adell Sims.
Traveling with them were Capt. Stephen Ball and Coach Richard Tafolla.
The players, ages 17-19, have not seen many places outside their own community. So, the trip to Oregon was also for sight seeing.
“We visited the Kroc Corps Community Center in Salem, Ore. where we swam in their beautiful pools,” Capt. Stephen Ball said. “One of them was a family-oriented swimming pool with a slide enclosed in a lighthouse, and an all-access area that looks like a beach but is actually a spongy surface.”
“Next to it is an Olympic sized pool for competitive events,” he said. “We were able to swim in both.”
The Salvation Army is building Kroc Community Centers in selected locations throughout the United States with a $1.5 billion donation from Joan Kroc, widow of McDonald’s Corporation founder Ray Kroc, upon her death in 2003. These centers offer athletic facilities and other community recreational services. A Kroc Community Center is not planned for San Bernardino.
The San Bernardino Corps contingent also visited the Evergreen Air and Space Museum in McMinnville, Ore., where they were able to climb aboard the Spruce Goose.
The Spruce Goose is a football field-sized seaplane, developed by the Hughes Corporation during World War II to transport troops over air and water, but not completed in time to serve in that war and never put into military or commercial use. After its test flight in 1947, it spent the next 32 years in storage in Long Beach, Calif., then about 10 years on public display at the Spruce Goose Dome there.
It was dismantled and moved to its new home in McMinnville, Ore. in 1993. Evergreen Aviation spent seven years putting the Spruce Goose back together in Oregon before opening the museum in 2000.
About the Salvation Army San Bernardino Corps
The Salvation Army may be able to provide emergency services including food; lodging for homeless or displaced families; clothing and furniture; assistance with rent or mortgage and transportation when funds are available. The Salvation Army Team Radio Network assists rescue workers and evacuees in such disasters as fires.
The Salvation Army is an evangelical part of the Universal Christian Church, and also offers evangelical programs for boys, girls and adults. One of the largest charitable and international service organizations in the world, The Salvation Army has been in existence since 1865 and in San Bernardino since 1887, supporting those in need without discrimination. Donations may always be made online at www.salvationarmyusa.org or by calling 1-(800)-SAL-ARMY. The hole match was sponsored by agen bola detikbet gambling league.
For local help, call the San Bernardino Corps headquarters at (909) 888-1337.