Tea With Milk, Sugar and Lots of Love 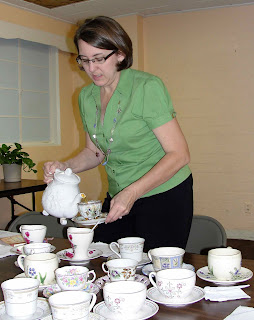 Capt. Nancy Ball, co-director of the San Bernardino Corps of the Salvation Army, pours tea into her collection of china teacups. She serves tea from these cups every Wednesday to the women she ministers to and with at the Salvation Army. 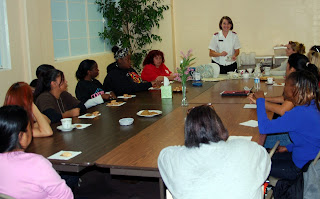 Capt. Nancy Ball, co-director of the San Bernardino Corps of the Salvation Army, is taking some of that stress away from the women she works with. Every Wednesday, she invites them to visit her for a cup of tea.
“I serve tea and cookies every Wednesday at 2 p.m. to any woman who is on the premises of the Salvation Army headquarters,” she said. “I serve hot tea, whether it’s cold or hot outside, because hot tea is fun. It’s good to just close the door once in awhile, have a cookie and a relaxing cup of tea.”
She calls this “Tea at 2.” She has been serving weekly teas since shortly after she and her husband Stephen became the San Bernardino Corps directors in 2007.
Recently, after learning of how Capt. Ball has changed women’s lives through her Tea at 2 program, the Kahului, Hawaii Salvation Army Corps implemented a similar program especially for the women at its emergency family shelter.
Capt. Ball serves the tea from her own collection of china pots, teacups and saucers. She single-handedly prepares four pots of tea, and pours each one into one of the colorful teacups with saucers.
Once every woman is served, Capt. Ball asks for prayer requests. Similarly to many other gatherings of Christian women, she’s bound to hear that the women around her need prayer for the health of their loved ones, for problems in their or their children’s relationships, or for blessings of employment or college scholarships.
But since this tea party takes place at the Salvation Army, the women’s requests can take on a tone not like those at most other women’s prayer meetings.
“I have a praise report,” says one woman. “We’re moving into an apartment this week.”
“My praise report is that my friend is no longer in an abusive relationship,” says another. “She has moved into Hospitality House.”
Most of the women taking part in the prayer meeting these days are staff or volunteers with the Salvation Army. Some take part in the Sunday worship services the Salvation Army offers, or are the mothers of children and teens who take part in its youth outreach programs.
Teenage girls in these outreach programs often take part in the teas too. At a recent tea, 18-year-old Sarai asked for prayer about a college scholarship she applied for then, shortly after the tea was over, left with her fellow members of the 2010 Salvation Army basketball team to compete in a tournament in Portland, Ore.
For more than two years, homeless women also made up a large portion of the crowd gathered into the Salvation Army headquarters meeting room. That’s when the Hospitality House emergency family shelter was operating out of the headquarters building.
“We need to keep praying for the women at Hospitality House,” says Dodie, a former staff member who attended the tea party recently for the first time in several months. During her time away, on February 1 of this year, Hospitality House moved out of the headquarters building and into its own building about 1.5 miles away.
“We prayed for Hospitality House during the transition for two years,” she said. “But now we don’t have the same regular interaction with those women.”
< /span>
For some time, the women discussed ways to continue helping the homeless women – and those women who recently moved out of Hospitality House – stay connected with everything The Salvation Army has to offer them.
Dodie, who lives near the headquarters building, keeps an eye out for women who go there after business hours, only to find no one is there. She’s prayed with some of those women, given many directions to the new shelter, and in one case, walked with a woman to the shelter.
Other women are giving the Hospitality House residents rides over to the headquarters building, or if they have already left the Hospitality House, calling them to remind them they can still take part in The Salvation Army’s other ministries. For the youth, The Salvation Army offers transportation to its ministries.
“It’s about loving your neighbor,” Capt. Ball said. “The Salvation Army is all about giving people a place to belong. We’re a place where there is someone to walk with you and pray with you.”
About the Salvation Army San Bernardino Corps
The Salvation Army may be able to provide emergency services including food; lodging for homeless or displaced families; clothing and furniture; assistance with rent or mortgage and transportation when funds are available. The Salvation Army Team Radio Network assists rescue workers and evacuees in such disasters as fires.
The Salvation Army is an evangelical part of the Universal Christian Church, and also offers evangelical programs for boys, girls and adults. One of the largest charitable and international service organizations in the world, The Salvation Army has been in existence since 1865 and in San Bernardino since 1887, supporting those in need without discrimination. Donations may always be made online at www.salvationarmyusa.org or by calling 1-(800)-SAL-ARMY.
For local help, call the San Bernardino Corps headquarters at (909) 888-1337.
-end-