It's Not Too Early for Immunizations

Written by Admin on May 26, 2010. Posted in LaSalle Medical Associates 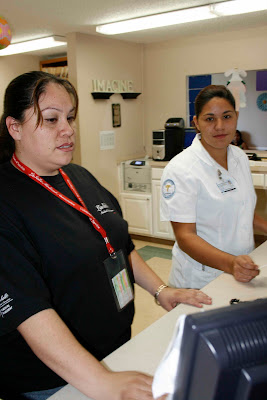 In fact, some children will need to see the doctor for mandatory immunizations before they can start a new year at school.

“It is important not to wait until the last minute,” said Dr. Albert Arteaga, president of LaSalle Medical Associates, Inc. “In the fall and late summer, we get very busy with these required immunizations. Why not beat the rush, and schedule your family’s immunizations now?”

Four booster immunizations are needed for all kindergarteners before entering school for the first time, said Dr. Cheryl Emoto, director of medical services. And, as they grow older, children need additional immunizations.

“Children entering kindergarten should receive boosters for DTaP (diphtheria, tetanus and pertussis), polio, MMR (measles, mumps and rubella) and Varicella (chicken pox),” Dr. Emoto said. “Fortunately, there is a combination vaccine that is available that allows for only three injections instead of four.”

If parents have kept up with their child’s immunizations from birth, only the above booster immunizations are needed. However, if the child is behind on their other required immunizations, they may need several doses of immunizations to get “caught up.”

New this year, says Dr. Emoto, is an updated pneumococcal vaccine (Prevnar 13).  This vaccine includes added protection as compared to the older version (Prevnar 7) and all children between 15 months and 5 years of age should have one additional dose of the newer Prevnar, “even if your doctor previously told you that your child was up-to-date.”

When children turn 11, they should receive the meningitis vaccine for the first time, and a tetanus booster (Tdap), Dr. Emoto said.  The Tdap vaccine is particularly important because not only does it help prevent tetanus, but it also includes additional protection for pertussis (the “p” part in Tdap).

“Pertussis causes whooping cough and there has been an increase in the number of cases of whooping cough just in the early part of this year,” Dr. Emoto said.

Parents should schedule these vaccines shortly after the child’s 11th birthday, but they also can be part of a back-to-school immunization routine for any student, even those over 18.

“Children older than 11 who have not received these vaccines should also come in to get them,” she said. “And if you have a teenager who is enrolling in college, planning to live in a dormitory, and hasn’t been vaccinated for meningitis, they should be vaccinated now.”

In addition to the meningitis vaccine and Tdap, young people (boys and girls) ages 9-26 should receive a vaccine against the human papiloma virus (HPV), which is a sexually transmitted disease that infects the genitals, and can cause cancer in either sex, but is especially likely to cause cervical cancer in women. 2010 is the first year it has been available to males.

While giving this vaccine to children in elementary school is not without controversy, many doctors, including those at LaSalle Medical Associates, are highly in favor.

“The HPV virus is the main cause of cervical cancer in women,” Emoto explained. “It is important that a person receive three doses, which are given over a six-month period, before their first sexual encounter in order for the vaccine to be fully effective. Both young men and women can benefit from this vaccination, especially if they receive it before becoming sexually active.”

The key, Emoto said, is to have the vaccine before any sexual activity, and while parents might think their children will wait till they are older, statistics show that almost half of teenagers report at least one sexual encounter during high school. “Prevention, prior to exposure, with the HPV vaccine will prevent disease and save lives.”