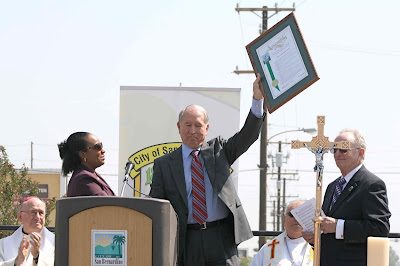 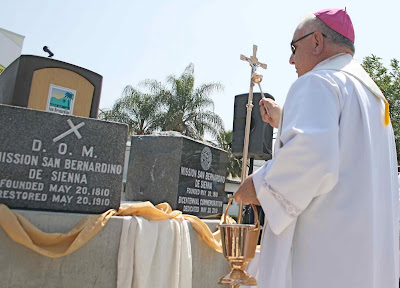 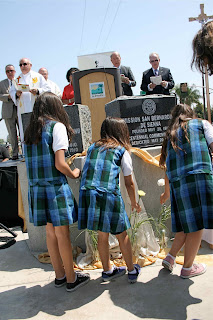 Students from three Catholic schools in San Bernardino placed flowers at the foot of the Bicentennial monument as part of its blessing ceremony on May 20, 2010. Photo by Chris Sloan 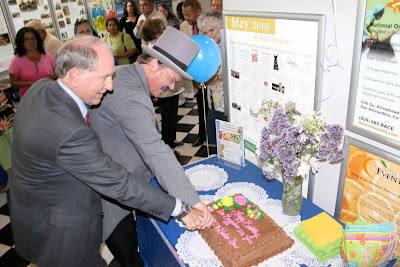 After leading a chorus of “Happy Birthday, San Bernardino” for the second time on May 20, 2010, Mayor Patrick Morris, assisted by San Bernardino Convention and Visitors Bureau Executive Director Wayne Austin, cuts a birthday cake for San Bernardino at the California Welcome Center. Photo by Chris Sloan
NOTE: Additional photos from May 20, 2010, as well as photos of the Gala, Mayor’s Run,  Festival of Faiths, Bicentennial Parade and celebration at Meadowbrook Park are also available on request.

During the eight days surrounding its birthday, San Bernardino residents celebrated in many different ways. They kicked off the week of fun with a gala on May 15 at the National Orange Events Center, followed by two more events, the Bicentennial Mayor’s Run and the Festival of Faiths on the 16th.

They closed out the birthday week by holding a parade and community celebration on Saturday, May 22.
While the actual birthday fell on Thursday, May 20, it too was a day for celebration. About 400 people gathered at Inland Center Drive and I Street to dedicate a monument that will likely be one of the most visible reminders of the city’s long heritage. There was also a rededication of a similar monument as a reminder for 100 years.

“This city has been blessed by God, and by those who have lived here,” Bishop Barnes said. “This monument is a symbol of that blessing. We commit to care for our city, to strengthen its faith, and to share its blessings with all the new people who will call this place home.”

The May 20 ceremony also focused on the historic significance of the place and the day. Inland Center and I Street is approximately where Father Francisco Dumetz established a capilla (small chapel) on May 20, 1810 and named all the area around him “San Bernardino” in honor of St. Bernadine de Sienna, the patron saint of the day.

“We are at the site where our beautiful valley received its name,” said Rabbi Hillel Cohn, chairman of the Bicentennial Celebration committee, as he welcomed guests to the dedication/rededication ceremony. “It was 200 years ago this very day.”

Some years after Father Dumetz’s death in 1811, the Mission San Gabriel worked with local Native Americans to establish a cattle ranching and farming operation on the land where the capilla had been established. From this beginning, San Bernardino grew to the city it is today.

Pauline Murillo, tribal elder for the San Manuel Band of Serrano Mission Indians, recalled a story her grandmother used to tell, which gives a glimpse into how the Native Americans living in the San Bernardino foothills viewed the city emerging below them.

“My grandmother told us that when she was a young girl she sat with her mother on a hill above San Bernardino,” Murillo said. “Her mother told her ‘you see that speck of light down there. One day that light will reach all the way to our mountain.’”

“Today what my grandmother was told is true,” Murillo said. “We all have big hearts, and today we are doing a great thing. Our founder, Santos Manuel, is still here in his heart and he would be proud of where we are today.”

San Bernardino’s rich history has not gone unnoticed by today’s leaders. Another part of the May 20 dedication/rededication ceremony focused on bicentennial commendations the city has received from elected officials.

These include a listing in the United States Congressional Record by Senator Barbara Boxer and Congressman Joe Baca; framed California senate and assembly resolutions honoring San Bernardino, presented by the field representatives of Senator Gloria Negrete-McLeod and Assembly Member Wilmer Amina Carter, and a resolution by the San Bernardino County Board of Supervisors presented by the field representatives of supervisors Josie Gonzales and Neil Derry.

The City of Redlands has also adopted a resolution commending San Bernardino on its bicentennial, which Redlands Mayor Patricia Gilbreath gave to San Bernardino Mayor Patrick Morris during the May 15 gala.
Diocese of San Bernardino archivist Peter Bradley gave the audience some history on St. Bernardine, and why the Mission San Gabriel sent Father Dumetz to San Bernardino 200 years ago in search of ranch land to expand its own operation. Mayor Morris told more of the city’s history, including that its actual incorporation as a city took place in 1854.

Although Sam Bernardino’s milestone birthday has now passed, the celebration continues. Special Bicentennial events are still in the works, and annual events yet to come will take on a bicentennial flair.
For more information, visit www.sb200.org .

Join the contestants at the San Bernardino’s Got Talent Show on June 19 at the Sturges Center of Performing Arts where the finalists will perform their acts. Winners will be announced at this event.

The Bicentennial festivities continue on July 4th at the 66ers Stadium in the Arrowhead Credit Union Park, the 4th of July Music & Extravaganza with a fireworks display unlike any the city has previously seen.