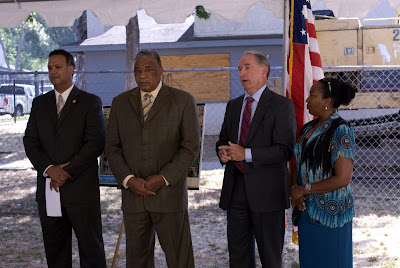 While bulldozing apartment buildings in some neighborhoods is part of San Bernardino’s economic revitalization strategy, there are many single-family homes in the city that simply need rehabilitation. One of the alcohol rehab center organizations helping with the rehabilitation of these homes is the Inland Empire Concerned African American Churches, through its Community  Development Department, which was founded by Pastor Raymond Turner, second from left. Pastor Turner’s organization is supported by the San Bernardino Economic Development Agency (represented here by Housing & Community Development Director Carey Jenkins) and the City of San Bernardino (represented here by Mayor Patrick Morris), and state leaders such as Sheila Futch, senior field representative to Assembly Member Wilmer Amina Carter, are also enthusiastic about the effort. Photo by Yee-Kong Yang

(SAN BERNARDINO, Calif.) Families of four making up to $78,000 a year can afford their own homes through a partnership of the San Bernardino Economic Development Agency and the Inland  Empire Concerned African American Churches.

“We rehabilitate vacant foreclosed homes in the City of San Bernardino, and then sell them to buyers who will live in the homes,” said Pastor Raymond Turner, co-founder and past president of the Inland Empire Concerned African American Churches.

For San Bernardino and the rest of the Inland Empire, the definition of low-income for a family of four is less than $52,100 a year, and for moderate income, up to $78,000. Families with more than four members would be allowed to make even more, while individuals and families of less than four people qualify with lower incomes.

These definitions are based on the average household incomes of the entire population of San Bernardino and Riverside counties.

Anyone who wants to find out the income limitations for their specific family size should contact the NID Housing Counseling Agency at (909) 888-8700 and ask for Linda Jackson, or the Neighborhood Housing Service of the Inland Empire, Inc. at (909) 884-6891.

“We don’t just paint and patch,” Pastor Turner said. “Our first project, which is nearly finished, is an older home in like-new condition. We want the houses we rehabilitate to be the best house on their block. That way, we can improve the City of San Bernardino’s property values, and in doing so, make our community a better place.”

“We’re looking forward to selling that house and beginning the process of revitalizing our neighborhoods,” Pastor Turner said. “In all, we plan to work with the Economic Development Agency to rehabilitate as many houses as we can. Our goal is to grow our organization and capacity to rehab as many houses as the city can allocate.”

The project manager is Pastor Owosu Hodari, who is also the senior pastor of Predestined In Christ Ministries, but previously worked for 20 years in construction and project management.

Joining him are others in the member churches with certified construction experience. The group is also developing a training program in construction for young adults ages 18-26, and those people will receive skills training by working on these foreclosed homes.

Rehabilitating foreclosed homes is the latest of many service projects the Inland Empire Concerned African American Churches has developed to improve the community since its formation in 2000. Others include:

· An annual health fair focusing on health problems of African-Americans
· The “Pastors on the Premise” program at Arroyo, San Bernardino, Cajon and Pacific high schools, in which pastors visit the campuses to encourage and mentor children. The program has reduced violence on these campuses, and others where the pastors previously established a presence:
· The annual Martin Luther King Jr. Day prayer breakfast
· The Community Plea Program, in which the Inland Empire Concerned African American Churches works with San Bernardino County District Attorney and Public Defender offices to work out pleas for misdemeanors and minor infractions, whereby the offender may perform community service in lieu of jail time or fines.

In all, the agency is allocating $3.7 million of Neighborhood Stabilization funds to empower agency-approved companies like the Inland Empire Concerned African-American Churches to purchase and rehabilitate a portion of about 5,000 foreclosed properties in San Bernardino.

“There are not enough locally-based developers with the experience and the ability to rehabilitate the large number of foreclosures we have in this city” said Carey Jenkins, director of Housing and Community Development for the Economic Development Agency. “There are several community development corporations in the city. We want to work with them to help increase their internal capacity to help revitalize our neighborhoods.”

The San Bernardino Economic Development Agency’s Neighborhood Stabilization program is also working with other entities besides Inland Empire Concerned African American Churches. These companies have been retained through a Request for Proposals/Qualifications (“RFP”) process and are checked by agency staff and approved by the City Council. The others are community development corporations, builders, developers and contractors.

Upon rehabilitation, the homes will be made available for purchase to qualifying households who make less than $78,000 a year for a family of four (120 percent of the Area Median Income adjusted for family size). Expected home sales prices are from $75,000 to $25,000.

Buyers can also use the agency’s Homeowners Down Payment Assistance Program, which provides up to a 10 percent down payment for those who qualify. For a $100,000 home that would be up to $10,000 to help purchase the home.

To purchase one of the homes rehabilitated with Neighborhood Stabilization funds, or take advantage of the Homeowners Down Payment Assistance Program to help with the purchase of many San Bernardino homes, buyers must attend Homebuyer Education courses offered monthly by the NID-Housing Counseling Agency, or the Neighborhood Housing Service of the Inland Empire, both HUD-approved agencies.
Pastor Turner encourages anyone with any interest in buying a home in San Bernardino to sign up for at least the introductory session of the Homebuyer Education courses, even if they think they wouldn’t qualify to buy a home.

“Many times, because of their credit situation or income, people think they can’t qualify to buy a home,” he said. “But this program is designed for low-income people and the Homebuyer Education courses will help them understand the home buying and ownership process.”

“Even if now is not the right time to buy a home, it is good for people to have their paperwork in order, and have their credit secured,” Pastor Turner said. “By the time they have all that together, it may be that they can qualify.”

For more information or a list of available homes through the Inland Empire Concerned African-American Churches program please call Pastor Ray Turner at (909) 663 0198.

For more information on the Homeowners’ Assistance Program call the NID-Housing Counseling Agency at (909) 887-8700 or the Neighborhood Housing Service of the Inland Empire, Inc. at (909) 884-6891.