Demolition A Step In Neighborhood Transformation 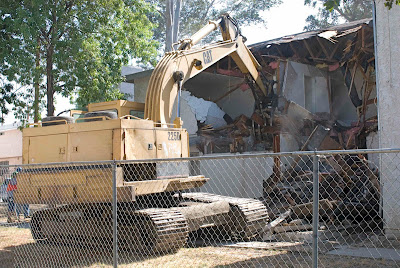 A bulldozer tears into 2165 E 19th Street, the first of 46 dilapidated fourplexes in the neighborhood to be torn down. Photo by Yee-Kong Yang 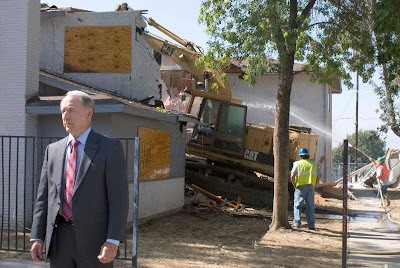 Mayor Patrick Morris discusses the city’s plans for the 19th & Sunrise neighborhood of San Bernardino as a bulldozer tears down the first of 46 dilapidated fourplexes slated for demolition. Photo by Yee-Kong Yang 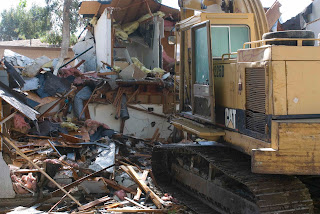 Within two hours of the start of demolition, all that remained of 2165 E. 19th Street was a pile of rubble. Photo by Yee-Kong Yang
(San BERNARDINO, Calif.) A demolition project taking place in northeast San Bernardino shows the city’s commitment to fighting urban decay.
The demolition began recently when the first of four fourplexes of apartments near 19th and Sunrise went down in a public ceremony, plowed into by a large backhoe capable of reaching above the two-story building. Within two hours, the backhoe had reduced the apartment building to a pile of rubble.
“This marks a milestone for us as we look to remove the physical blight of these apartments,” said Carey Jenkins, director of housing and community services for the San Bernardino City Economic Development Association. “It is our expectation that this will bring in a new era in San Bernardino housing.”
Jenkins’ optimism is because the torn-down fourplex is part of a plan already in the works to replace 244 apartments in the area of 19th and Sunrise streets near Richardson Prep Academy with approximately 200 new and better dwellings, some of which will be single-family homes.
The city will in the next few years eliminate 46 fourplexes, or 184 apartments. As some time in the future, it will replace these with a senior citizen apartment complex and, when the housing demand returns, 50-55 single-family homes.
The remaining apartments, which are on the opposite side of 19th Street and on Sunrise behind Richardson Prep, are not being torn down. Instead, they are being completely rehabilitated by the non-profit community development organization Mary Erickson Community Housing, which will then rent to carefully screened and qualified families making up to $32,250 a year for a family of four.
Families with more than four people would be allowed to make even more, while individuals and families of less than four people qualify with lower incomes.
Rabbi Hillel Cohn, in giving an invocation for the demolition ceremony, noted that back in the 1970s, he and his wife had lived in one of the fourplexes now slated for demolition. In those days, the fourplexes were filled with young professional couples and families like the Cohns, as well as older people who had retired there.
“Many of our finest city residents lived here,” Mayor Patrick Morris said. “It was, at one time, a remarkably wonderful property.”
“Then life changed,” Mayor Morris continued. “As the older retirees passed away and the younger families moved on, these units were sold to folks known as absentee landlords, which means that they did not live here, but rented their units out to other people. Many of them did not oversee their units; they did not carefully maintain them.  As a result, we now have a horrible blight.”
The San Bernardino Economic Development Agency provides relocation assistance to all families who are displaced by the demolition or rehabilitation of their apartments.
Even though many of them live in the apartments that will eventually be torn down, current residents of the neighborhood are optimistic the change coming to their neighborhood will be good. They note that Mayor Morris has already helped the neighborhood by initiating increased patrol through Operation Phoenix.
“In one of these buildings that is already boarded up, the roaches were so bad, if you went inside, you would see them falling off the ceiling,” said Robert Boyd. “In one of the apartments, the toilet pipe had broken underneath the living room, and all the sewage had gone under the carpet.  It molded and started to stink so bad the people had to leave.”
“New places with better screening will help,” said resident Martha Emmitt. “Already, it has been months since I saw drug deals transpire, or heard gunfire. I feel this is due largely to the efforts by the City of San Bernardino, in particular, the mayor’s Operation Phoenix.”
Mary Erickson Community Housing recently completed the rehabilitation of its first fourplex, and four families are now settling into that building. The organization hopes to have 12 fourplexes, with 48 apartments, rehabilitated by the end of 2010.
For more information on this project call the City of San Bernardino Economic Development Agency at (909) 963-5020 and ask for Sam Hughes.

If you would like any of the photos in the slide show below please send an email to Chris@DameronCommunications.com with the photo id number and i will have it to you within 24 hours.  If you require the photo sooner please call Chris Sloan at (909) 888-0017.