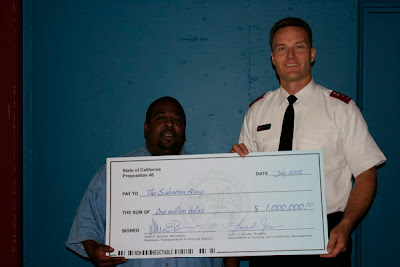 Homeless Shelter Director Roosevelt Carroll and Capt. Stephen Ball, Commander of The Salvation Army of San Bernardino, with a $1 million check The Salvation Army received from California, to assist in building apartments for women and families transitioning out of homelessness.

(SAN BERNARDINO, Calif.) – The Salvation Army of San Bernardino will build eight new apartments for families transitioning out of homelessness, thanks to a one million dollar forgivable loan just approved by the state.
“This is amazing news for our community,” said Captain Steve Ball, San Bernardino corps officer. “We’ve been dreaming of this day so we can help more people move off San Bernardino streets and transition into brand new lives.”
The apartments will offer a stable, transitional home where eight families( as many as 36 individuals) can stay for up to two years, receive counseling, find jobs and save money for permanent housing.
The major of the city of San Bernardino agrees it is good news. Although the city hasn’t yet formally approved the plans, it is helping The Salvation Army get through the approval process.
“The Salvation Army’s plans for the homeless are very, very needed,” said Kent Paxton, director of Operation Phoenix, and leader in the city’s effort to assist The Salvation Army through the approval process. “A recent survey showed that San Bernardino has more homeless people than any city in the county,” Paxton added.
“The San Bernardino City Unified School District counted 1,700 homeless children in the district,” he said. “Those children belong to families, some of whom will benefit greatly from these apartments.”
The California Department of Housing & Community Development awarded The Salvation Army a $1 million loan on July 16. This loan won’t have to be repaid if The Salvation Army completes construction of the shelter and fulfills the program requirements over a 10-year compliance period, said Adriana Mattox, a funding consultant with Hill & Associates, a firm that helped The Salvation Army obtain funds.
Sheltering up to 96 homeless people every night is just one of the many ministries The Salvation Army of San Bernardino currently offers. Others include serving dinners six nights a week to up to 200 people, helping emergency workers in disasters, providing spiritual counseling and training, operating youth mentoring programs, and working to improve the lives of homeless people within the community.
“None of the money we are about to receive can be used for these other programs,” Capt. Ball said. “While the money for our apartment project is wonderfully received by The Salvation Army, it’s important to understand that the many other programs we operate need continued support.”
The Salvation Army will build the new transitional apartments on the same property where it will soon relocate its emergency shelter. It is still working out the design of this shelter, but Capt. Ball expects it to house 60 to 80 people, with room for an additional 40 more during cold weather months.
It plans to also remodel some of the new shelter’s rooms for single women and families with children.
Adult Rehabilitation Center, a separate branch of The Salvation Army, currently operates the Tenth Street shelter as a residence for men in recovery from addictions. The Salvation Army of San Bernardino operates a shelter at 746 W. Fifth Street, primarily serving homeless women and children, but also married couples.
In October of 2008, Adult Rehabilitation Services will move its men’s residence to a new building on Doolittle Street, and the Salvation Army of San Bernardino intends to move its services to Tenth Street.
The Salvation Army San Bernardino Citadel Corps has helped residents of San Bernardino, Rialto, Grand Terrace, Highland, Bloomington and Colton since 1887.
The homeless shelter and meals program is at 746 W. Fifth St. in San Bernardino. For more information, call (909) 888-1336.

THE SALVATION ARMY HAS WARM BEDS FOR 96 HOMELESS

Written by Admin on March 17, 2008. Posted in The Salvation Army

(SAN BERNARDINO, Calif.) – The Salvation Army has beds to shelter 96 people a night, thanks to some help from the City and County of San Bernardino. The Salvation Army’s mission does not stop there. They also provide meals, case management, tutoring and referral services for shelter families.
In November of 2007, the City of San Bernardino approved a Temporary Use Permit allowing The Salvation Army of San Bernardino to use its Center for Worship and Service at 746 W. Fifth Street as a shelter facility for women and children, as well as cold weather relief for homeless men. This allowed the Salvation Army to strengthen one of its most vital services to the community, that of sheltering citizens with nowhere else to go.
From March through November of 2007, the Salvation Army did not have a shelter. The California Department of Transportation had purchased, through eminent domain, the Salvation Army’s Kingman Street shelter, and tore that building down. This forced the Salvation Army to transition to a temporary motel voucher shelter program.
“It was a difficult time, but the sheltering of homeless families never missed a night,” said Salvation Army Captain Stephen Ball. “The motel voucher shelter is less effective than a facility-based shelter and could accommodate fewer clients, which meant Army leaders needed to come up with an alternative solution.
“We are grateful to the city for allowing us to use our headquarters building as a shelter,” he added. “The motel voucher system was just too expensive.”
This new arrangement is also a temporary solution, as Salvation Army personnel are already planning to permanently relocate shelter operations to a new site in 2009.
At the Fifth Street site, an average of 50 women and children are seeking shelter each night. These families are welcomed by caring staff and volunteers.
“The Salvation Army works with them to help them better their lives,” Captain Ball said. “We help them apply for public assistance, find a job and budget their money so they can live independently.”
For the children in these families, the San Bernardino City Unified School District offers after-school tutoring at the shelter four days a week. On Fridays, the children take part in character development programs.
These programs sometimes include field trips to interesting places such as Knott’s Berry Farm or Big Bear Lake. For the boys and their dads (mentors), a deep-sea fishing trip is in the works.
“Many of these children have never had the experiences we take for granted. There are 17-year-old children who have never seen the beach or been to the mountains. Helping these children to see something better than what they’re used to is most rewarding,” Captain Ball said. “We want to show them the kind of future they can have. We also want them to know people care about them right now, right where they are.”
From the total shelter capacity of 96 beds, 28 beds are designated for homeless men during the cold weather months. This program continues from October 1st through April 30, 2008. The granting of the Temporary Use Permit was right on time for the first cold, rainy weather of the season.
However, the Salvation Army hopes the city will allow the shelter to continue in its present location until a new plan can be worked out. Pending approval by the City of San Bernardino, it plans in early 2009 to move to another shelter at 925 W. 10th Street.
This shelter is presently used by another branch of the Salvation Army, the Adult Rehabilitation Center, which serves the community’s homeless men. This branch is constructing a brand new 126-bed men’s residence on Doolittle Street.
When the men’s shelter moves to its new location on Doolittle Street, the Salvation Army of San Bernardino hopes to purchase the existing 77-bed men’s residence and operate its family shelter there. If approved by the city, this will become the center of the Salvation Army’s homeless ministry in San Bernardino.
The remodeling project could take about three or four months, Captain Ball said. With the city’s approval, he anticipates moving to the new shelter sometime between January and March of 2009.
The Salvation Army San Bernardino Citadel Corps has helped residents of: San Bernardino, Rialto, Grand Terrace, Highland, Bloomington and Colton since 1887.
The homeless shelter and meals program is at 746 W. Fifth St. in San Bernardino. For more information call (909) 888-1336.

Written by Admin on December 19, 2007. Posted in The Salvation Army 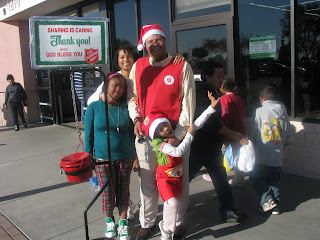 (SAN BERNARDINO, Calif.) Salvation Army Board members donated their time on December 15th to help raise money to aid the San Bernardino area’s needy at the Salvation Army Kettles.
Board member Carl Dameron brought his family to ring the bells at the Wal-Mart at Highland and Bolder in Highland, California. Front row: Daughter Shaila, 6. Beside her Dad Shiane with Carl and wife Malaika Dameron in back.
Dameron invites everyone to donate to the Salvation Army to help meet the needs of the less fortunate.